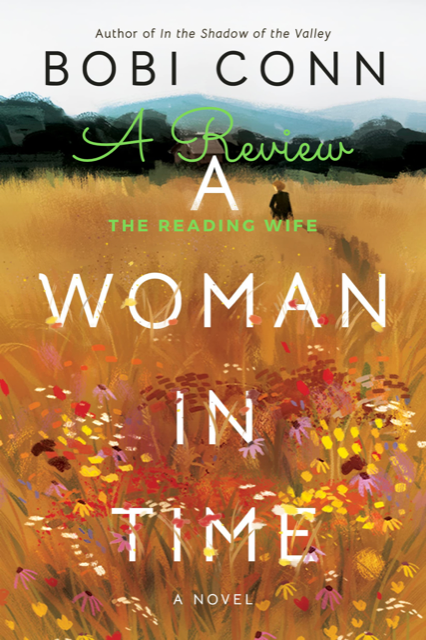 A Woman in Time

A Woman in Time is the latest novel to be checked off my to be read list. This is Bobi Conn’s second book, her first being a memoir titled In the Shadow of the Valley.

Have you read A Woman in Time? Come on in and let me tell you about it!

About A Woman in Time

A woman challenges the constraints of life in Prohibition-era Appalachia in this sweeping and richly rewarding novel about endurance, survival, and redemption.

The McKenzie women, empowered with a formidable history rooted in the foothills of Appalachia, have passed down their folk-healing wisdom through generations. Rosalee, the last living headstrong daughter in Granny McKenzie’s line, soaked up everything she could about the secrets of the forest before a series of tragedies left her alone, without the protection of the women who came before her.

The close-knit ties of Rosalee’s childhood are long gone. Now, at her eastern Kentucky farm, she bears a marriage with a volatile bootlegger. She struggles with the demands of motherhood. And her independence is relegated to its “proper place”: under the thumb of men.

Her optimism dimming, Rosalee finds solace in the Kentucky woods, a space that holds secret powers of protection from a life Rosalee can no longer control. To the graves of her female ancestors, beside the waters of an enchanting spring, Rosalee returns time and again to consider her future—and discovers a mysterious connection to her past.

As Rosalee wrestles with her isolation, with being a wife in an increasingly dangerous marriage, and with being a woman of her time, she must draw on her strength and resilience to survive—and to protect—on her own terms.

Thoughts on A Woman in Time

I found this book to be an extremely difficult read for several reasons. The first one being that it was really hard to get into. I think Conn spent too much time in the first few chapters talking about the history of the family. It could have been shortened and still made all the necessary points. But don’t let that prevent you from reading this book! Just be patient, because it gets better!

“Witchcraft is a word men use when they’re scared of women. Don’t you pay no mind to those old fools. But take care they don’t see you doing things that scare them.”

Bobi Conn, A Woman in Time

This book took me longer than most to read just because it was such a heavy topic and not easy to read. I found myself needing to take breaks and find a much lighter read before I could pick this one up and continue.

But, that doesn’t mean it isn’t a worthwhile read, because it absolutely is! It is hard to read because of all the abuse and oppression of women that occur in it, but that is part of that generation and certainly wasn’t out of the ordinary back then. Sometimes it is hard to remember I’m reading a historical fiction novel when talking about difficult subjects like that, and I have to remind myself.

Back then, there was no real escape for women. It is even more difficult for women who are “different” or speak out against the normal. As the quote above implies, women had to hide many things about themselves if they were different.

When I read novels like A Woman in Time and look back on those women, I’m always impressed at what they survived, and the inner strength it took to make it through.

Final Thoughts on A Woman in Time

Bobi Conn strikes me as the kind of woman with an old soul, wise beyond her years, and that shines through in her novel, A Woman in Time. I’m so glad that I had a chance to read this book. If you are a fan of historical fiction, this is one that you don’t want to miss!

This was the first novel from author Bobi Conn that I’ve read, but if this is any indication of her writing skills, it certainly will not be the last.

Have you read A Woman in Time or any other writing from author Bobi Conn? Are you a fan? Let me know your thoughts in the comments!

Bobi Conn was born in Morehead, Kentucky, and raised in a nearby holler, where she developed a deep connection with the land and her Appalachian roots. She obtained her bachelor’s degree at Berea College, the first school in the American South to integrate racially and to teach men and women in the same classrooms.

After struggling as a single mother, she worked multiple part-time jobs at once to support her son and to attend graduate school, where she earned a master’s degree in English with an emphasis in creative writing. In addition to writing, Bobi loves playing pool, cooking, being in the woods, attempting to grow a garden, and spending time with her incredible children.

Purchasing A Woman in Time