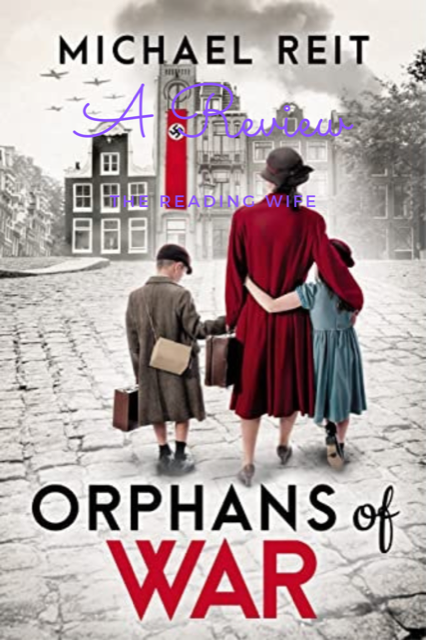 Orphans of War from author Michael Reit is the latest novel to be checked off my always growing to be read list. This novel caught my attention because I am a big fan of historical fiction relating to World War II.

“Get your things ready. You get to take one bag of clothes and toiletries. You have fifteen minutes.”

Have you read Orphans of War yet? Come on in and let me tell you about it!

About Orphans of War

In occupied Amsterdam, Nora Brouwer sees her husband and police officer Floris become more radical with each passing day. Fueled by Nazi propaganda, Floris is keen to help the German occupiers in their quest to rid the city of their Jewish countrymen and women.

Christiaan Brouwer is dismayed when he witnesses a violent raid against Jewish Amsterdammers in the middle of the day. Along with Nora, he must decide whether to stand by or rise up against the growing Nazi violence—and pit himself directly against his brother.

When Nora and Christiaan discover Floris is no longer just following orders but zealously hunting down Jews in hiding, they know they only have one choice. But how long before Floris finds out his closest family is conspiring against him?

Based on true events, Orphans of War is a story of bravery, deceit and resistance in World War II Amsterdam.

Thoughts on Orphans of War

“After this intervention with the Sicherheitsdienst officer during the riots last year, he’d joined the Bureau Joodsche Zaken – the Bureau of Jewish Affairs. While Floris had struggled to grow within the regular police force, this specialized division had him lead a small squad of policemen. And he was doing something he believed in; he was helping solve the Jewish problem.”

Orphans of War is an interesting perspective on World War II and the rise of Hiitler and the Nazis, while viewing it from Amsterdam and the occupation there.

It starts off a little bit slow, as the reader learns about Floris, his wife Nora, and his brother, Christiaan. But don’t worry, the pace will speed up as you go. Be patient, as the character development is important in this story.

It may be a bit slow to start with, but it isn’t a difficult read. The character development is relevant and kept in balance with the story. There aren’t too many characters and their stories to try and follow. The main characters are Floris, Nora, and Christiaan. Because it was so well-written, it only took me a few hours to read, and I read it almost straight through. I was hooked and despite not liking Floris from the beginning, I wanted to keep reading, as I wanted to find out where the story was going.

“That’s our fifth family of the day, Brouwer. Maybe it’s time to step it up, yeah? We’re never going to reach our quota with you slacking.”

I’ve read plenty of stories about surviving the concentration camps and life after, but Orphans of War was the first one I’ve read that talked about the start of the occupation and of the Jewish people being hunted and rounded up, and the raids on homes to find them all. It was certainly an eye-opening read in that regard.

“Floris closed the door. Today had not been a good day – those pesky Jews were getting better at hiding. The resistance had grown significantly, and they were becoming more organized. They were somehow always one step ahead of him; it was the third time he raided an empty house this week. It’s getting embarrassing.”

But Orphans of War isn’t just a story about the occupation and the events that took place. It is a story about family; about the political division between family members, and joining opposing sides of the war. I can’t quite imagine a war dividing my family, that’s for sure. But that is exactly what happened here.

Final Thoughts on Orphans of War

There were so many people who helped the Jewish people escape and stay out of the concentration camps. I am always astonished by the courage it takes to do something like that, and part of why I am always fascinated to read their stories.

Orphans of War is the kind of story that really made me think; what would I do if something like this happened, and someone I loved joined what I deemed to be the wrong side? How would I handle that? Would I allow it to divide us? Would I step up and help the side I agreed with if it could save lives? I don’t have an answer for that because it hasn’t happened, and I certainly hope it never does. But that is the kind of question this novel evoked in me.

I highly recommend Orphans of War for any fans of historical fiction, or anyone simply wanting a good quality thought-provoking read. It is absolutely worth the time to read. This was the first novel I’ve read from author Michael Reit, but I know it will definitely not be the last.

Have you read Orphans of War or any other writing from author Michael Reit? Are you a fan? Do you enjoy historical fiction? Let me know your thoughts in the comments!

Michael Reit writes historical fiction based on true events and people. Writing what he loves, he spent years researching lesser-known events, locations, and people to produce his debut novel Beyond the Tracks.

Inspired by the Polish resistance, his new novel, Warsaw Fury, focuses on the struggle of the Home Army & Jewish resistance in the Warsaw Ghetto during WWII.

He’s currently writing his third novel, which will transport readers back to WWII Amsterdam, where two brothers find themselves on very different sides as the Nazis step up their persecution of Dutch Jews.

Born in the Netherlands, he now lives in beautiful Vienna, Austria, with his partner Esther, daughter Bibi, and Hungarian Vizsla Maggie.