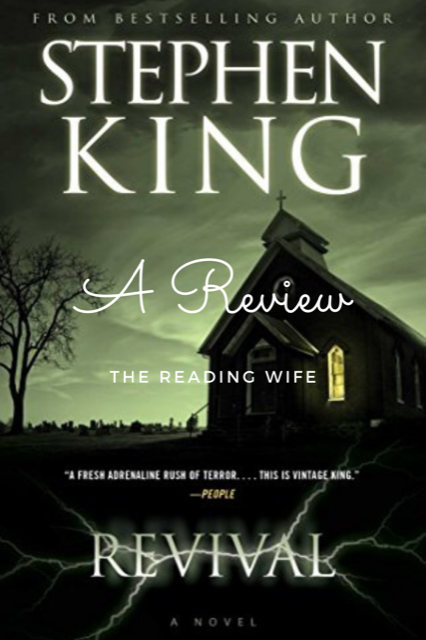 Revival from Stephen King is my latest read that I just finished and it was a good one. Are you a fan of Stephen King’s writing?

Have you read Stephen King’s Revival? Come on in and let me tell you about it!

The new minister came to Harlow, Main, when Jamie Morton was a boy doing battle with his toy army men on the front lawn. The young Reverend Charles Jacobs and his beautiful wife brought new life to the local church and captivated their congregation.

But with Jamie, he shares a secret obsession – a draw so powerful, it would have profound consequences five decades after the shattering tragedy that turned the preacher against God, and long after his final, scathing sermon.

Now Jamie, a nomadic rock guitarist hooked on heroin, meets Charles Jacobs again. And when their bond becomes a pact beyond even the Devil’s devising, Jamie discovers that revival has many meanings.

The narrative on the back of this book certainly captivated my attention. A preacher who turns against his faith? With a lot of mystery behind it, along with a heroin addict. That certainly sounds like it would be interesting!

The story follows the lives of both Jamie Morton and Charles Jacobs, as their lives intertwine and they connect over the years. Charles Jacobs had, by most accounts, a pretty ideal life. That was headed in the direction he wanted it to be, until it took a very tragic turn.

That is one of those experiences that changes someone, and there is absolutely no going back to who he was before that event. I’m not spoiling it for you, but that impact is completely relatable and understandable. King does a great job at expressing what many of us have gone through under different circumstances.

That change would be evident in the fact he lost his faith, which isn’t a small change, given he is a preacher. At this point, he becomes the villain in the story. I like that aspect. Because it isn’t often talked about how someone becomes a villain in a story. I feel like Charles Jacobs should have been more of the main character than Jamie Morton was.

The story overall has a very sad and tragic vibe and feel to it. It isn’t particularly creepy until the end. I’m not sure if I like or dislike this fact. One of my favorite aspects of The Shining was the creepy factor. But Revival is missing that. It’s different, would be the best way to describe that. It has mixed reviews on this aspect, but like I said, I haven’t decided how I feel about that part.

The one part that disappoints me is the ending. There is fantastic character development throughout the book, bringing relatable characters to life. Stephen King is a pro when it comes to character development, and the one I generally compare other writers to in this regard. But the ending felt very rushed to me. Stephen King took so much time to develop the characters throughout the entire book, and then really rushed through the ending. That part did not impress me. I went online after reading this to see if it was just me who felt this way, and I wasn’t the only one.

Overall, it is a good book. Not necessarily the traditional writing style that Stephen King has developed in past books. The fact it is different does not sit well with some of his fans and lifelong readers. Revival has many mixed reviews, both good and bad. My personal opinion is that it was a good book, but I would have written the ending differently. The ending is the only part I can complain about in this book.

If you’ve enjoyed my review of Revival, have a look at my other favorite books.

Stephen King is the author of more than fifty books, all of them worldwide bestsellers. His first crime thriller featuring Bill Hodges, Mr Mercdes, won the Edgar Award for best novel and was shortlisted for the CWA Gold Dagger Award. Both Mr Mercedes and End Of Watch received the Goodreads Choice Award for the Best Mystery and Thriller of 2014 and 2016 respectively.

King co-wrote the bestselling novel Sleeping Beauties with his son Owen King, and many of King’s books have been turned into celebrated films and television series including The Shawshank Redemption, Gerald’s Game and It.

King was the recipient of America’s prestigious 2014 National Medal of Arts and the 2003 National Book Foundation Medal for distinguished contribution to American Letters. In 2007 he also won the Grand Master Award from the Mystery Writers of America. He lives with his wife Tabitha King in Maine.