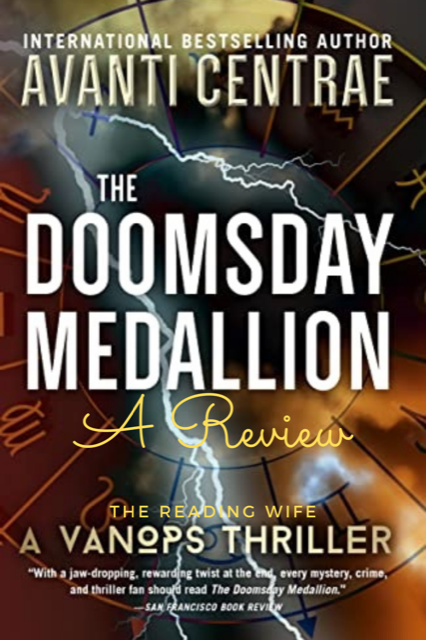 Have you read The Doomsday Medallion? Come on in and let me tell you about it!

About The Doomsday Medallion

Aikido black belt Maddy Marshall is celebrating the completion of her black ops training when news of a military takeover in the South China Sea shocks the world because it was predicted by a sixteen-year-old French student.

When intel chatter spells danger to Avril, the young seer, VanOps Director Bowman assigns Marshall and her twin brother, Will Argones, to protect the girl.

Emotions between the siblings are running hot due to their aunt’s recent stroke, which has reminded them of the childhood accident that scarred both his chin and her heart.

Tensions ratchet higher when they arrive at Avril’s home to find the instant social media star has been kidnapped, leaving them with only clenched fists and cryptic clues that lead to a formula encoded on an etched-bronze medallion.

While Taiwan fears an invasion that will set off an apocalyptic chain of events, Marshall and Argones race through medieval French towns, Italian cathedrals, and ancient Greek temples attempting to find Avril before their enemies use the girl to discover the Holy Grail of military intelligence. If the team fails, they won’t need a crystal ball to know millions of innocent souls will be destined to join Nostradamus in the afterlife.

The Doomsday Medallion is an electrifying, globe-trotting thriller that delves into humankind’s timeless fascination with prophecy and illuminates the mesmerizing and dangerous potential of a weaponized oracle.

Thoughts on The Doomsday Medallion

Inspired by The DaVinci Code and National Treasure, The Doomsday Medallion takes the heroes on a breathtaking journey through Europe as they try to uncover the clues left by the prophet Nostradamus that could turn the tide in a potential new world war.

The Doomsday Medallion is a thrill-a-minute action story, filled with good humor, twists and turns, exciting chases and fights, and political intrigue.

This book is the third in the VanOps series, and even though I haven’t read the first two books, I found the story engaging and easy to follow. There were some references to characters and events from the previous two books, but nothing that detracted from the story.

The story moves at a brisk pace, never lingering in any one setting for long. And the chapters are very short too…there’s over 90 of them! The brief chapters make the pace of the story seem even more frenetic, but it never loses its focus.

There are numerous car chases and gun fights, all told in a gritty and often brutal fashion. My heart pounded during some of those moments, as our heroes tried to stay one step ahead of the bad guys.

Final Thoughts on The Doomsday Medallion

Part medieval history lesson, part Bourne Ultimatum-esque action thriller, and part family drama, The Doomsday Medallion offers a little something for everyone. If the other books in this series are just as exciting as this one, I will gladly read them too!

Have you read The Doomsday Medallion or any other writing from the author Avanti Centrae? Let me know your thoughts in the comments!

Looking for your next exciting novel to read? I’ve got you covered here! Or if a short story is more what you want, click here for my favorites.

Avanti Centrae is the author of the international multi-award-winning VANOPS thriller series. An instant Barnes and Noble Nook bestseller, The Lost Power took home a genre grand prize ribbon at the Chanticleer International Book Awards, a bronze medal at the Wishing Shelf Awards, and an Honorable Mention at the Hollywood Book Festival.

Solstice Shadows won a bronze at the competitive Readers’ Favorite Awards, the Global Thrillers Genre Grand Prize at the most recent Chanticleer Awards, and was a #1 Amazon bestseller in both the U.S and Canada.

Her father served as a U.S. marine corporal in Okinawa, gathering military intelligence during the first decade after the Korean War. Her work has been compared to that of James Rollins, Steve Berry, Dan Brown, and Clive Cussler but has a voice all its own. She resides in Northern California with her family and German Shepherds.