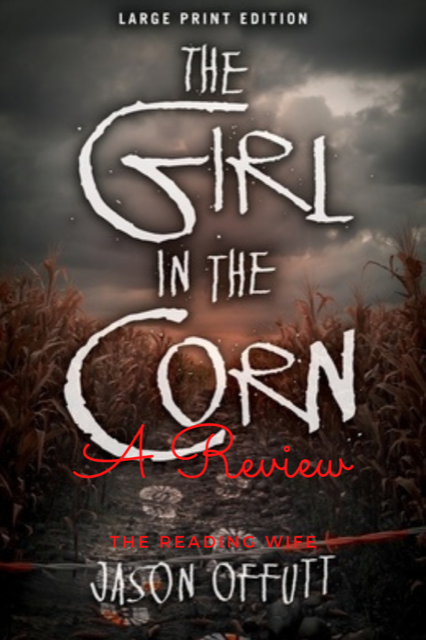 The Girl in the Corn

The Girl in the Corn from author Jason Offutt is my latest horror novel that I’ve just finished reading. It was interesting, to say the least, full of some strange twists and turns.

Have you read The Girl in the Corn? Come on in and let me tell you about it!

About The Girl in the Corn

Beware of what lurks in the corn.

Fairies don’t exist. At least that’s what Thomas Cavanaugh’s parents say. But the events of that one night, when he follows a fairy into the cornfield on his parents’ farm, prove them wrong.

What seems like a destructive explosion was, Thomas knows, an encounter with Dauðr, a force that threatens to destroy the fairy’s world and his sanity.

Years later, after a troubled childhood and a series of dead-end jobs, he is still haunted by what he saw that night. One day he crosses paths with a beautiful young woman and a troubled young man, soon realizing that he first met them as a kid while under psychiatric care after his encounters in the cornfield.

Has fate brought them together? Are they meant to join forces to save the fairy’s world and their own? Or is one of them not who they claim to be?

Thoughts on The Girl in the Corn

To start with, The Girl in the Corn is weird. You think it’s going to be a cutesy, Peter Pan-style adventure, but then it morphs into something else entirely. It has the kind of weirdness that you’d see in old 1980s TV shows, but this book goes far beyond that.

The titular fairy is mischievous, playful, and downright creepy at times. As an example of this book’s weirdness, in one scene she offered Thomas a plate of cake, but when he refused, the cake turned into a turd on the plate instead. And the weirdness kept escalating from there.

As the story took shape, all of the little weird vignettes made more sense, but I honestly had no idea what to expect each time I turned the page. It was like driving by a wreck on the side of the road. You know you shouldn’t look, but morbid curiosity made me do it anyway.

Sometimes, it felt like the author threw in these little weird gross moments at random. Frequently they did nothing to advance the story, and were just there for shock value. If that was what he was going for, then mission accomplished.

Despite my misgivings about the early-to-middle portions of the book, The Girl in the Corn’s final sequence was captivating. The weirdness factor tapered down significantly by the end, and it became a fun action sequence as our heroes tried to defeat the Dauor before it could destroy our world.

Final Thoughts on The Girl in the Corn

Expect the unexpected as you read through this book, and you won’t be disappointed. If you can get past the many “WTF” moments, it will become an enjoyable ride. Just go in with a very open mind!

Have you read The Girl in the Corn, or any other novels from author Jason Offutt? Let me know your thoughts in the comments!

If horror novels aren’t your thing, have a look around at my other favorite novels and see if you find your next great read!

Jason Offutt writes books. This is infinitely better than what his father trained him to do, which was to drink beer and shout at the television.

He is best known for science fiction, such as his end-of-the-world zombie novel Bad Day for the Apocalypse (a curious work that doesn’t include zombies), his paranormal non-fiction like Chasing American Monsters (that does), and his book of humor How to Kill Monsters Using Common Household Objects.

He teaches university journalism, cooks for his family, and wastes much of his writing time trying to keep the cat off his lap.

Purchasing The Girl in the Corn

If you are interested in buying the hardcover version of The Girl in the Corn, click here.