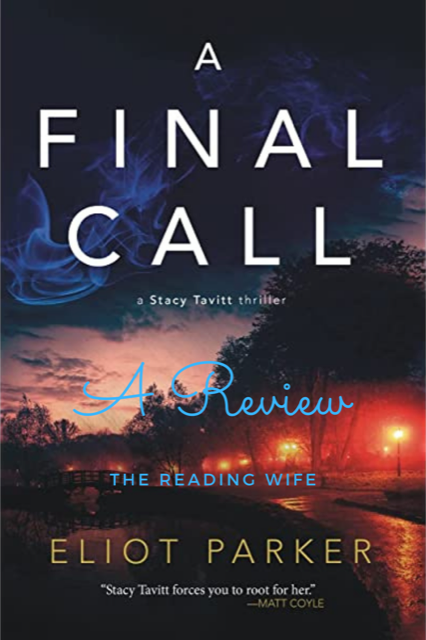 A Final Call from author Eliot Parker is the latest novel to be checked off my ever-growing to be read list. This is the first novel of Parker’s that I have read.

Have you read A Final Call? Come on in and let me tell you about it!

About A Final Call

Cleveland Homicide Detective Stacy Tavitt is contacted by a former college classmate who asks for help in finding her missing son, Colton. Still reeling physically and emotionally from her last investigation—which led to the disappearance of her brother–Stacy reluctantly agrees.

At first, there is little reason to suspect foul play in his disappearance until he becomes the primary suspect in the murder of an ex-girlfriend. It’s a race against the clock as Stacy tries to find out what happened to her brother and clear his name, all while stopping a lethal killer who continues to target the friends and family connected to Colton.

Beset by threats inside and outside of her life, Stacy must go to great lengths to find a killer and save her brother.

Thoughts on A Final Call

A Final Call is the second book in a series of Stacy Tavitt thrillers. I had not read the first book in the series, and indeed I didn’t even know that this was a series until I had finished reading it. As such, some of the references to events in the previous novel flew over my head.

Nevertheless, the murder investigation that Officer Tavitt must undertake is a compelling one. A young woman is found brutally murdered, and the primary suspect is one Colton DeVito, the woman’s ex-boyfriend. The opening chapter is told from Colton’s point of view, and that’s the only window we get into Colton’s actions and motivations leading up to the discovery of the body.

It’s up to Tavitt (and the reader) to piece together the mystery. After all, no one seems to be able to even find Colton, much less figure out why he supposedly did what he did. Any leads that Tavitt investigates turn out to be dead ends, and it’s apparent that someone behind the scenes is pulling the strings to make the investigation more difficult.

On top of all that, Tavitt has to deal with the disappearance of her brother, who seems to have some connection to corruption within the Cleveland police force. A former colleague-turned-criminal reveals that there are a number of unsavory characters among the police. Suddenly, no one that Tavitt works with seems trustworthy, not even her captain or her partner. Some of them might even be involved in covering up the Colton DeVito investigation.

Dealing with two simultaneous mysteries has started to overwhelm Tavitt, and everyone is on edge. But as Tavitt pieces together what’s really going on, the two parallel plot threads line up in a satisfying way.

Final Thoughts on A Final Call

The story starts out on a strong note, but drags severely in the middle when all of the various plot threads are about as far apart as they can be. But the final act pulls them all together in a sequence that left me thrilled, nauseated, and relieved all at the same time.

The ending of the story is very abrupt and confusing, but knowing now that this is the second in a series of novels, I’m confident that the third book in the Stacy Tavitt series will resolve any issues I had with the ending.

Have you read A Final Call or any other writing from author Eliot Parker? Are you a fan? Let me know your thoughts in the comments!

Eliot Parker is the author of the short story collection Snapshots, which won the 2020 PenCraft Literary Award and the 2021 Feathered Quill Book Award for Short Story Anthology. His thriller novel, A Knife’s Edge, was an Amazon number 1 bestseller and is currently being optioned as a television series by Voyage Media and Screenworks Entertainment.

Eliot has received the West Virginia Literary Merit Award for his works and has also been a finalist for the Southern Book Prize in Thriller Writing in 2017 for his novel Fragile Brilliance.

He hosts the podcast program, Now Appalachia, which profiles authors, editors, and publishers in the Appalachian region.