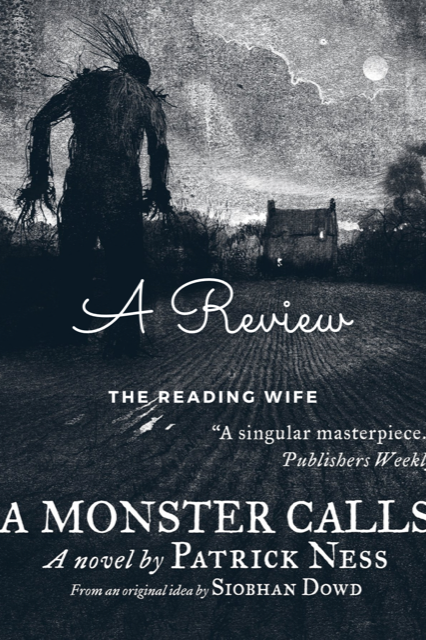 A Monster Calls from author Patrick Ness is the latest novel to be checked off my to be read list. The interesting thing is that it is meant for children and young adults. Yet when I found out about it, it was from an adult reading it and raving about it on social media.

“There is not always a good guy. Nor is there always a bad one. Most people are somewhere in between.”

I found it interesting how many adults loved this book, and it sparked my interest to see what it was all about, and if it was great for both kids and adults. I went into it with a very open mind, as I had no idea what to expect from a book labeled for readers age 12 and above.

Have you read A Monster Calls yet? Come on in and let me tell you about it!

About A Monster Calls

An unflinching, darkly funny, and deeply moving story of a boy, his seriously ill mother, and an unexpected monstrous visitor.

At seven minutes past midnight, thirteen-year-old Conor wakes to find a monster outside his bedroom window. But it isn’t the monster Conor’s been expecting – he’s been expecting the one from his nightmare, the nightmare he’s had nearly every night since his mother started her treatments.

The monster in his backyard is different. It’s ancient. And wild. And it wants something from Conor. Something terrible and dangerous. It wants the truth. From the final idea of award-winning author Siobhan Dowd – whose premature death from cancer prevented her from writing it herself – Patrick Ness has spun a haunting and darkly funny novel of mischief, loss, and monsters both real and imagined.

Thoughts on A Monster Calls

A Monster Calls is a really quick read, at just two hours for me to finish it, and it seemed to go by really quickly. There was nothing tedious about this book, despite it being sad and not having a happy ending.

“The mist surrounded them again suddenly and his grandma’s yard faded away. The world changed to gray and emptiness, and Conor knew exactly where he was, exactly what the world had changed into. He was inside the nightmare.”

Wow, is the first thought that comes to my mind after finishing A Monster Calls. It is all about grief, as a boy navigates his way through the stages of grief as his mother is dying of cancer. The message of love, loss, and hope, are things even adults need to hear.

I realize this book is aimed at younger readers, but I can absolutely understand why adults love it too, because we’ve all lost someone close to us, and it is relatable. We’ve all had to go through the stages of grief and probably more than once in our lives. It is amazing how sad and beautiful this story is, all at the same time.

Keep the tissues handy if you’re prone to crying when you read books or watch movies. You’ll very likely need them when reading this!

Final Thoughts on A Monster Calls

“I did not come to hear her, the monster said. I came to heal you.”

Given the fact my father died unexpectedly when I was around Conor’s age, then dealt with my mother having terminal cancer when I was older, this book spoke to me and some of my own thoughts and experiences.

I don’t want to spoil the book for you, so all I can tell you is that you’ll want to read it, and you won’t regret it!

I highly recommend A Monster Calls, no matter what age you are. It isn’t just for young adults, so please don’t let that keep you from reading this book. This is one that I will not forget anytime soon.

Have you read A Monster Calls or any other writing from author Patrick Ness? Are you a fan? Let me know your thoughts in the comments!

Patrick Ness is the award-winning and best-selling author of the Chaos Walking trilogy, A Monster Calls, More Than This and The Rest Of Us Just Live Here. John Green has described him as “an insanely beautiful writer”. He has won every major prize in children’s fiction, including the Carnegie Medal twice. He’s written the film of A Monster Calls as well, out 2016. He lives in London.