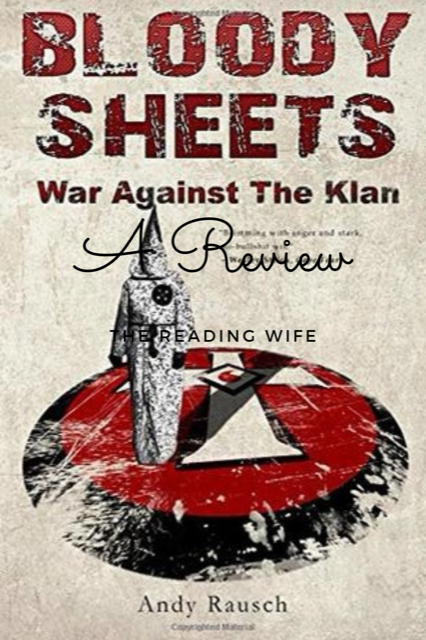 Bloody Sheets is my latest book review. It is a novel from author Andy Rausch.

Bloody Sheets is a short but powerful story of race, hate, and revenge. It follows DeRay “Coke” Cokely, a mob enforcer who has spent time in prison and has a long dark history to his life.

Have you read Bloody Sheets by Andy Rausch? Come on in and let me tell you about it!

If you are enjoying this review, feel free to browse the rest of my favorite books.

When a young African-American man is lynched in a small Alabama town, his estranged father sets out for revenge, embarking on a blood-soaked journey that will leave the ravaged bodies of dead Klansmen in his wake.

I’m not entirely sure what I was expecting when I picked up Bloody Sheets to read, but nothing quite as dark as what I read. It is a good story, for sure. But not for anyone under 18. It is way too graphic for even a young adult to handle.

Coke’s son Will and his mother live in a small predominantly white Alabama town when Will is lynched by the Klu Klux Clan, who are still very active in the small town. Coke is busy with his own criminal life elsewhere when he receives the call about Will from his ex-wife, Deija.

Coke wasn’t a very good father, which was something on Will’s mind as he was thinking about becoming a father himself. During most of Will’s childhood, Coke was in prison. Will had been dating a white girl. The daughter of a dentist, and prominent member of the town who had very racist views himself. All they wanted was the opportunity to have a relationship together.

Deija asks Coke to take revenge on the KKK members who killed their son Will, and the story follows that journey of revenge and justice.

This story caught me off guard and actually left me speechless for a variety of reasons. It is graphic, and I mean disturbingly graphic. There is blood on almost every page. However, it actually adds to the story and isn’t just nauseatingly gross. It really does add to the feel of the book.

When I first started reading it, I honestly thought this was set back in the 1950’s, when racism was alive and well in America. Then the author references things like cell phones, Xbox, and Barack Obama having been the president. It’s not 1950, it is present day America.

I may live under a rock, but I always hope that racism isn’t nearly that prominent in today’s world. The thought of that makes me sad because we have come so far in our world as the years progressed. This shouldn’t even be a thing anymore.

Bloody Sheets seemed more like a movie to me. It took me on a roller coaster ride because I was never sure what was going to happen next. It was easy to follow, despite being so graphic. It felt like a movie to me instead of a book, if that makes any sense. There are some serious plot twists that give this a movie feel to me. Ones I really wasn’t expecting, but I can see myself screaming out loud in the theater during a couple of scenes if they were really a movie.

I can’t say I’ve ever read anything like Bloody Sheets before, but it was good. Graphic, real, and emotional. There is a ton of swearing and racial slurs in this book, so just be aware of that. It fits the characters quite well in this story, but there are a lot.

Toward the end, the story takes another twist and becomes heartwarming. A shocking thing in this kind of dark, graphic, and violent story. But it reminded me that at the end of the day, we’re all human with real emotions.

This interesting plot twist reminds me that life is short. We only have so much time on this planet, and to really focus on making the most of the time we are given.

The book is short, being a whopping 124 pages, but I read it in one sitting because I was hooked from the beginning. Despite the graphic descriptions, the character development was evident throughout the book This really gave the opportunity for me to get to know Coke as it progressed. I found myself wanting him to be successful and avenge Will’s death and have a happily ever after. I cheered when people helped him along the way.

There was no happily ever after in this book, but after reading it, there was no other way to end it. The way it ended was literally perfect. Shocking, yet perfect. I’m not going to spoil it for you, I’m just going to tell you to go read the book. Bloody Sheets is definitely worth taking the time to read!

Have you read Bloody Sheets from author Andy Rausch or any of his other writing? Let me know your thoughts in the comments!

Andy Rausch is the author or editor of nearly fifty books. His nonfiction (as Andrew J. Rausch) includes My Best Friend’s Birthday: The Making of a Quentin Tarantino Film, The Cinematic Misadventures of Ed Wood (w/ Charles E, Pratt Jr.), and Perspectives on Stephen King.

His fiction includes Layla’s Score, Riding Shotgun and Other American Cruelties, and Bloody Sheets. Several of his books have been optioned for film and his work has been translated into French, Spanish, Portugese, and Chinese. He is a web editor at Diabolique magazine and the screenwriter of the film Dahmer vs. Gacy.