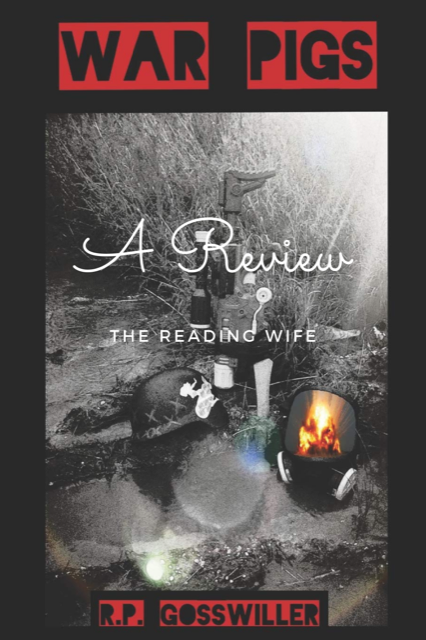 War Pigs is a new book from up and coming novelist R.P. Gosswiller. I’ve had not only a chance to read War Pigs, but to interview Gosswiller about this book as well.

Have you read War Pigs yet? Come on in and let me tell you about it!

Lieutenant Grierson had been promoted, and demoted, more times than he could count before leaving the military. Now, at the head of a rag-tag group of psychos and war criminals, he is forced to turn this group of misfits into a proper fighting unit.

Employed by a woman who is cold and aloof, Grierson is thrust into the middle of an intergalactic conflict that is far more than he can chew. Not sure of who to trust, or when he will die, his battle becomes one to keep his men alive within the turmoil of war, and possibly betrayal.

War Pigs follows Lieutenant Grierson after leaving the military and going to work here. He is tasked with leading a group of misfits who shouldn’t actually work together on dangerous missions in space and on other planets.

If you’ve ever watched Game of Thrones and know the kind of people who are in the Night’s Watch, it’s the same here. That is the kind of misfits that Lieutenant Grierson is trying to train to be a cohesive group.

It is certainly entertaining to read about this, to say the least. I laughed out loud many times. Tigger, my cat, would stare at me like I had sprouted an extra eyeball and horns on my head because I would randomly start laughing while reading this book.

The book is science fiction, based on a future time where space travel is a thing and people live on other planets. Which is not my normal style of reading, believe me. But this was real, relatable, and just great.

Gosswiller did a wonderful job with character development in this book, and I found myself being able to envision each character in the book, and the interactions they all had together. Every character made perfect sense to me, and I really enjoyed the ability to actually envision and relate to them.

Grierson training his group led up to one really big and very dangerous mission, which was mainly what the book covered. I’m not going to spoil that for you, I’m just going to tell you to grab this book and read it.

The ending was not what I expected, but I’ve come to expect that from R.P. Gosswiller’s books. The way he develops the characters, there is always the possibility things can go in completely different directions, and that is fun. It makes the end a surprise every time for me.

War Pigs is not my usual genre of books, but that is what made it even more enjoyable, and it is definitely worth taking the time to read! I hope you enjoy War Pigs as much as I have.

Have you read War Pigs from author R.P. Gosswiller, or any of his other writing? Let me know your thoughts in the comments!

R.P. Gosswiller is a world traveled adventurer who spends his free time exploring Texas. Once a wildland firefighter and disaster responder, he now sails the world as a Merchant Marine. He enjoys playing hockey and doting on his two love-spoiled children. He has been writing his entire life and plans on writing until the day the coroner pronounces him dead…

Did you enjoy the review of War Pigs? Need another R.P. Gosswiller book to read? Here are my favorites!

I had the chance to sit and visit with R.P. Gosswiller about War Pigs, as I generally do. This is fun because I learn so much about his writing process and character development.

This book isn’t part of the Father Jericho series, and stands alone. What made you go in this direction? Will War Pigs turn into a series, or is it a stand alone book?

War Pigs was written to be stand alone, but I really enjoyed the style and genre. As much as I love Father Jericho, I wanted to stretch my muscles, so to speak, and tackle other projects.

Tell me about your other in-progress projects you’ve got going on now.

Seneca Jones, my favorite character, makes a more prominent appearance in this book. I love that! Will he be a recurring character in all of your books?

Seneca Jones is special to me. I created him a long time ago as a filler, nothing more. He has evolved into this madman, who is possibly not a man, and who directs the flow of the plot at times. He is an enigma, and to this day is only absent from one of my books.

For being a filler, he’s just brilliant! Lol. I find him hilarious and disturbed both.

That’s what makes him so much fun! Watching him evolve. Scar in the Father Jericho series has been the same kind of evolution.