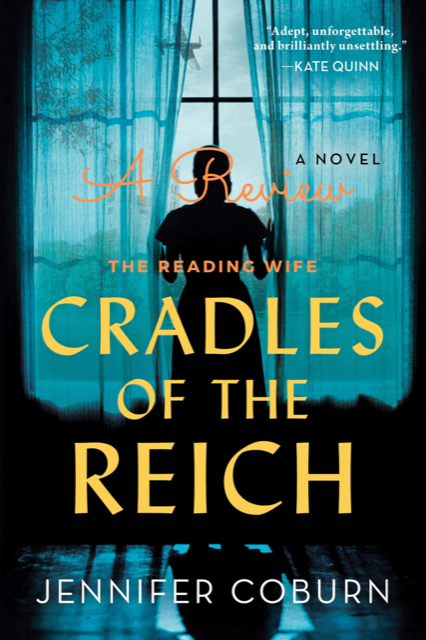 Cradles of the Reich

Cradles of the Reich is the latest novel to be checked off my large to be read list, and I am very glad I picked this one as my latest read.

I’ve always had a fascination with historical fiction, but especially that based around World War II, Nazi Germany, concentration camps, and survivors of these horrific events, and this was certainly one that I couldn’t put down.

Have you read Cradles of the Reich yet? Come on in and let me tell you about it!

About Cradles of the Reich

Three women, a nation seduced by a madman, and the Nazi breeding program to create a so-called master race

At Heim Hochland, a Nazi breeding home in Bavaria, three women’s fates are irrevocably intertwined. Gundi is a pregnant university student from Berlin. An Aryan beauty, she’s secretly a member of a resistance group. Hilde, only eighteen, is a true believer in the cause and is thrilled to carry a Nazi official’s child. And Irma, a 44-year-old nurse, is desperate to build a new life for herself after personal devastation. All three have everything to lose.

Based on untold historical events, this novel brings us intimately inside the Lebensborn Society maternity homes that actually existed in several countries during World War II, where thousands of “racially fit” babies were bred and taken from their mothers to be raised as part of the new Germany. But it proves that in a dark period of history, the connections women forge can carry us through, even driving us to heroism we didn’t know we had within us.

About “Cradles of the Reich”

At the center of “Cradles of the Reich” is the complex relationship between three German women who meet at a Lebensborn maternity home. Gundi, a young resistance fighter, must find a way to escape the Lebensborn program before the Nazis discover the truth and destroy her family. Hilde, impregnated by a high-ranking, married SS officer, will stop at nothing to gain power within the Third Reich. While World War l veteran, Nurse Irma, finds her true calling working at Lebensborn, she soon discovers its chilling secrets.

Thoughts on Cradles of the Reich

Cradles of the Reich was a fascinating page turner for me, that I read in just a day, because I simply couldn’t put it down. It kept me up far past my bedtime this weekend, but it was totally worth it. If you’ve ever played the “just one more chapter” game and suddenly it is 0330 in the morning, then you know exactly what I mean.

This story may be fictional, but it is still based on facts and true events. A good quality historical fiction novel, in my opinion, is one where I learn something about an event or a time period, and it inspires me to go and do more research to keep learning about it, and this one definitely did that!

I must admit that I didn’t know anything about the Lebensborn Society or that facet of the Nazi regime. Which is why I appreciate it when I can learn something from a novel. It is just one more aspect of the horror that so many faced during this dark time in our history.

Final Thoughts on Cradles of the Reich

It is obvious that Jennifer Coburn did her research and due diligence before writing this novel, and I appreciate and respect that.

I can’t often say that I’m blown away by anything I read, but Cradles of the Reich is one that really did that, and I learned a lot just from reading it. I highly recommend this if you’re a fan of historical fiction novels, just want something interesting to read, or need a good one to get you out of a reading slump.

Have you read Cradles of the Reich or any other writing from Jennifer Coburn? Are you a fan? Let me know your thoughts in the comments!

Jennifer Coburn is an award-winning writer of the travel memoir, We’ll Always Have Paris, a mother-daughter adventure through Europe. She is the author of six contemporary novels and contributor to four literary anthologies.

Jennifer has written for U-T San Diego, Washington Post, Miami Herald, Mothering magazine, The Huffington Post, Salon.com, and numerous other newspapers and magazines. She lives in San Diego with her husband William and their daughter Katie.

Purchasing Cradles of the Reich