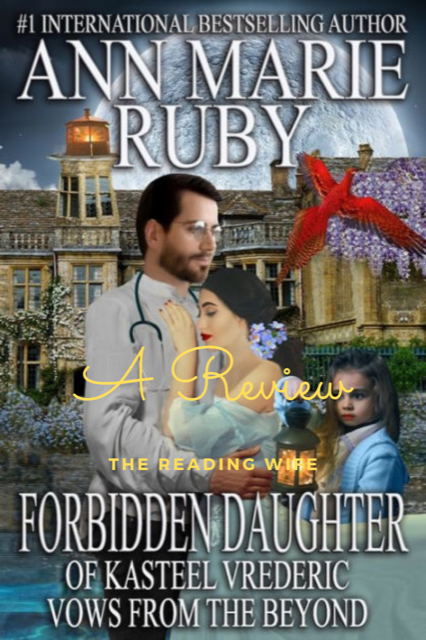 Ann Marie Ruby is a frequent flier within my blog, as I always enjoy reading her books. Forbidden Daughter is the fourteenth book I’ve read from her so far, and I fully intend on reading all nineteen before the year is over.

Have you read Forbidden Daughter of Kasteel Vrederic? Come on in and let me tell you about it!

The Kasteel Vrederic library opens its doors to the public once again, as it opens for all its sixth diary. Forbidden Daughter Of Kasteel Vrederic: Vows From The Beyond is a paranormal romance family saga novel by number 1 international bestselling author Ann Marie Ruby!

After the huge success of her previous books, she now brings to you her nineteenth book awaited by her international audience. Find out why her readers call her books, “the best books ever” and critics hail her books as “must-read” and “most thought-provoking.” Her writing style is famously known for making readers feel like they’ve made a close friend. As a globally renowned author, she now brings to you another timeless romance fiction based in the Netherlands.

Dr. Jacobus Vrederic van Phillip, the reincarnated form of the sixteenth-century diarist Jacobus van Vrederic, has now been struck by the lightning of karma for his one mistake committed in the sixteenth century. He has been reborn yet his mistake too traveled time with him, leading to centuries of regret and penance.

Now the spirits of Kasteel Vrederic are missing, so the protection given to the home by the ancestral spirits too has been lifted. An international criminal group has moved in, haunting the family members of Kasteel Vrederic, where they are left alive in the dark.

Yet all along, Jacobus hears his daughter, the child forbidden to enter, cry and say, “Forbidden in life I was to enter this home, as I only entered after my death. Now as I am in the rebirth tunnel, how do I enter my house and be with my parents as I am the forbidden daughter of Kasteel Vrederic?”

Now how does an arrogant bachelor find his twin flame if he has sworn off all women and written his love stories with his memories of his sixteenth-century Margriete? Who is the new woman with a different face who calls herself Margriete van Achthoven?

For help, along come all the inhabitants of Kasteel Vrederic, the woman who calls herself Margriete, the paranormal sixteenth-century soldier, a knight in shining armor from the seventeenth century, and a swordswoman on her horse. They line up to challenge karma and fight the international criminal group to bring back home the girl with the lantern, also known as the forbidden daughter of Kasteel Vrederic.

One of the things that I love the most about Ann Marie Ruby’s books is that I can pick them up at any time, and find exactly what I need at that moment. Sometimes it is to go and visit Kasteel Vrederic and live within that world for a bit, and sometimes it is to find comfort when I’m just not feeling myself.

In this case, I wanted to go and visit Kasteel Vrederic, as I was less than thrilled with the last book I had read, and needed something to reinvigorate my love of reading this weekend.

Forbidden Daughter is the sixth book in the Kasteel Vrederic paranormal romance series, and I have found I’m always excited to take a step back in time to go and visit this family. Somehow they seem like my own. It feels similar to opening a photo album and taking a stroll down memory lane.

Every single one of Ann Marie’s books feel like a hug wrapped into a novel, and I admire how she is able to do that, and Forbidden Daughter is certainly no exception. I find strength, comfort, joy, and peace whenever I read her books.

This book is labeled as paranormal romance, but it is so much more than that. Don’t let the category or label fool you.

I have always admired the style that is uniquely Ann Marie Ruby’s writing. This isn’t a traditional romance novel, and neither are any of the other books in this series. She isn’t afraid to go outside of the normal box when it comes to a romance novel, and I not only appreciate that, but I respect her courage to do so.

I don’t know if Ann Marie Ruby is going to continue the Kasteel Vrederic series with any more novels in the future, but I sincerely hope that she does.

If you haven’t read the Kasteel Vrederic series, I highly recommend that you do! You can’t go wrong with any of her books, but this series stands on its own.

Have you read Forbidden Daughter or any other writing from author Ann Marie Ruby? Are you a fan? Let me know your thoughts in the comments!

Did you enjoy my review of Forbidden Daughter? Need another great Ann Marie Ruby novel to read? Here are my favorites!