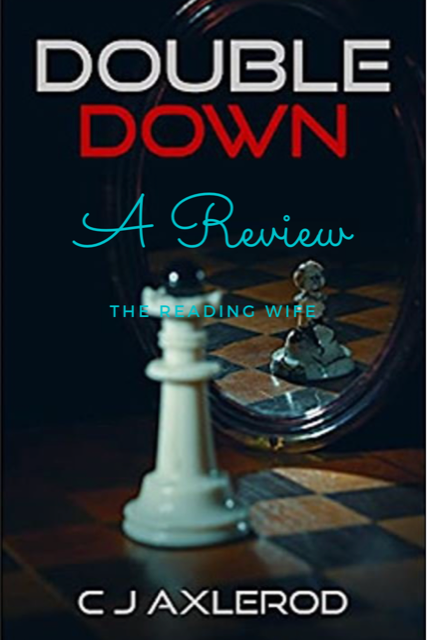 Double Down from author CJ Axlerod is the latest novel to be checked off my to be read list. I must say that Double Down is a very fitting title to this story.

Have you read Double Down from CJ Axelrod? Come on in and let me tell you about it!

Alex Cole was the King of Hollywood.

He had it all. Good looks, fame, fortune and the power that comes with being one of the most famous actors in the world. Alex was adored by audiences worldwide, and despite losing his parents in a horrific plane crash when he was only a teen, he managed to avoid all the pitfalls of young stardom and grew to become a true American idol.

Then, after an attempt on his life, Alex’s team decide that he needs more protection. While trying to keep the actor safe, his team unknowingly plunges Alex into a nightmare of murderous intrigue where the actor has to fight for his very survival.

Thoughts on Double Down

Superstar actor Alex Cole is on top of the world. Legions of fans, a legacy of beloved films, and a glitzy lifestyle that is envied by many. That is, until an assassination attempt drags him back into reality.

Fortunately for Alex, his team discovers that there is a YouTube performer who looks, acts, and even sounds like him. This doppelganger, Aaron, has devoted himself to pulling off impeccable impersonations of Alex. And it’s this skill that Alex wants to employ.

Alex hires Aaron to take his impersonations to the next level. Alex wants Aaron to study his every motion, every relationship, every quirk of body language, so that Aaron can essentially be Alex. Until the unknown assailant is caught, Alex wants Aaron to fill in for him at all of his public appearances and fool everyone.

This seems like the dream job for Aaron. Lots of money, living the high life, surrounded by Hollywood starlets, and living out his fantasies to a degree that most people can never achieve. Even the threat of subsequent assassination attempts doesn’t seem to dampen Aaron’s enthusiasm.

However, Aaron isn’t all that he seems. He has a dark past, shrouded in mystery. He’s belligerent, racist, misogynistic, and often cruel. Deep down, he’s not at all like the superstar actor he’s being paid to impersonate. And Aaron has an even deeper motivation: he wants to go beyond simply impersonating Alex, and actually become him.

Final Thoughts on Double Down

“Two lookalikes trying to live the same life” is such a common storytelling trope that there are innumerable ways that the author could fill in the story. It could have been a Parent Trap-type scenario, where Alex and Aaron are revealed to be long-lost twins. Or it could have been something closer to The Island, where the bad guy corners both Alex and Aaron and isn’t sure which is the “real” one.

Instead, Double Down becomes a study on psychosis, jealousy, and obsessive crushes. Aaron turns out to be a pitiful character, which becomes more and more apparent as the story progresses.

As we learn more about Aaron through cleverly inserted flashbacks, it becomes clear that Double Down isn’t really about Alex at all. It’s about Aaron, which makes the title of the book fitting in more ways than one.

Have you read Double Down from CJ Axelrod? Or any other writing from this author as Chris Coppel? Let me know your thoughts in the comments!

I was raised the son of a writer. My father wrote plays, films and novels. He was successful and suffered constant wanderlust. I was born in America when he was there writing Vertigo for Alfred Hitchcock.

I give that familial insight so that you can understand that I had the genes. I just needed to find my footing and get up the nerve to put pen to paper (or to be more accurate…open my laptop). Many would say that having a successful parent should make it easier to follow their path under the protective shadow of their parent’s success. Not so!

Writing is difficult. Writing in the hopes that you will be read and your works appreciated is terrifying. In my case, the fear of failure kept my ideas and stories buried in a back closet within my brain.

It is only now as I enter the latter part of my existence that I have been able to calm the fear and share my stories with those who may wish to read them.

I would like to think that it was my choice to write about things that go bump in the night, but it wasn’t. I had no idea that I would one day write tales of horror, but that is now what I do. With each new book, I feel drawn further into the dark void that we feel but rarely see.

I hope you will join me.