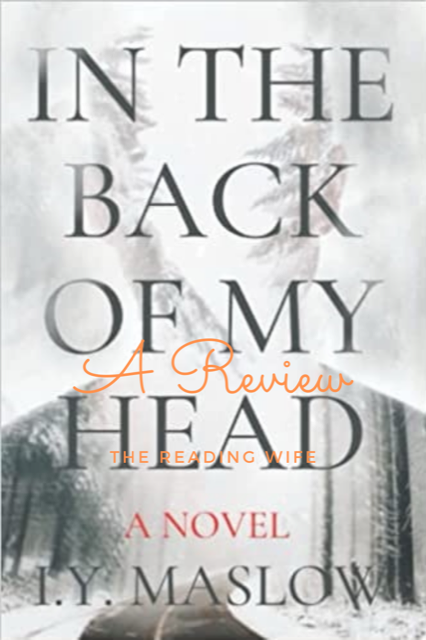 In the Back of My Head

In the Back of My Head is the debut novel from up and coming author I.Y. Maslow, and once I heard about it, it was catapulted to the top of my to be read list.

“The truth about Cole Torsney is one that often confuses me. It’s a complex truth. One I’m not sure even he understands. One I barely understand myself.”

There is something really special about a debut novel, and I felt the same excitement when I picked up Catalyst to read it.

“It was just a nightmare. The same annoyingly recurring one I’ve had since I was eight years old. Like a dog playing fetch, they come and go, never leaving me.”

Have you read In the Back of My Head? Come on in and let me tell you about it!

About In the Back of My Head

Nightmares of a girl being held captive.

A dilemma that shouldn’t exist.

Seventeen year old insomniac Cole Torsney has had recurring nightmares since he was eight years old. Always the same; of him and a young girl named Grace held captive.

Was any of it real?

According to those he trusts, it wasn’t. If so, then why do they feel as vivid as memories?

Determined to learn the truth, Cole starts an investigation of his own. However, the more he learns, the more questions he has. If his dreams are actually real, who kidnapped him and how did he escape captivity? Why did Grace have to die? Why did his mother commit suicide, coincidentally the same time his nightmares began, and why did he and his father flee shortly after her death?

He’s sure of one thing: a girl named Grace died 10 years ago, and she deserves justice.

But what is the price of justice, and is he willing to pay it?

Thoughts on In the Back of My Head

In the Back of My Head is a captivating novel that will take you on an unexpected journey, filled with more twists and turns than a winding coastal highway. Expect the unexpected when reading this!

This is quite the mix of mystery, suspense, romance, and even a little bit of comedy thrown in there at times.

“Sleep is a daunting chore. My bed feels like a prison, my mind a cell, and I keep locking myself there. Choosing to suffer. Each morning I wake more exhausted than before.”

In the Back of My Head was a novel that sucked me straight in and kept my attention through the entire thing. I couldn’t put it down! Literally! I read this in two sessions, in less than 24 hours. It was just that good. The only thing that stood in my way of finishing it all at once was the need for sleep.

There are a few grammatical errors, especially when it comes to quotes when people are talking. Normally this annoys me, because it can take me completely out of a story. The funny thing with this novel was that it was so good that I didn’t care. Nothing was going to take me out of this story until I was finished.

“These kids are harmful tissues, and killing them prevents further harm to society, to their future children, and to themselves. See, the cycle of abuse doesn’t end with the abuser, it ends with the victim.”

Final Thoughts on In the Back of My Head

I highly recommend In the Back of My Head if you want a novel that will keep you guessing through the entire thing.

I am blown away by the fact Iian is just eighteen years old. There’s no way I was that talented to create a story like this when I was that age. Honestly, if I didn’t know Iian was basically a kid writing this, I would think it was a mature adult of at least thirty years old and a lot more life experience under his belt writing this. That is part of what makes this debut novel so amazing.

This was the debut novel from I.Y. Maslow, but this young man has a very bright future in writing ahead of him! I am looking forward to whatever comes next from him.

Have you read In the Back of My Head from author I.Y. Maslow? Let me know your thoughts in the comments!

I’m an 18 year old, that holds a cpr certificate, and a real estate license, but uses none. I’m a doggie dad. I was born in Brooklyn, and at 12 years old moved overseas with my family, but moved back to Brooklyn, alone, almost a year ago.

Purchasing In the Back of My Head

If you are interested in buying the paperback version of In the Back of My Head, click here.

I had the wonderful opportunity to sit and chat with Iian Maslow about In the Back of My Head recently. Being so young and publishing his first novel, I wanted to know more about I.Y. Maslow.

What sparked your interest in writing? Tell me how you got started.

There’s a lot of answers to this question, there were several things that “sparked” my interest, but the number one thing—and this may seem funny—was this; as a kid, I’d love playing action figures, and when I was around 11 years old I realized something… these action figures aren’t enough. They couldn’t keep up with my imagination.

See I could only move two action figures at a time, and I could only build so much with so little lego. I wanted to create worlds, move crowds, and truly live in my own mind. So one day, while struggling to move five action figures at once, I just… stopped, put them down and played the story out in my head. Shortly after that, I picked up a pen, some paper and that was that.

Are you working on any other writing projects to follow In the Back of My Head?

Yes, I’m currently working on several big ones. In The Back Of My Head, was something I did to really learn how to write. To master my craft. I won’t lie and say I’m some amazing writer. I’m not conceited, or delusional. I’m a teenager, but trust me when I say this; MY NEXT BOOK WILL BLOW UP!

What authors inspired you?

This is a funny question because I grew up hating books. I’d gone years without reading, but I always knew I wanted to write. Now I read a book a week, however when I started writing, I hadn’t picked up a book in years.

With being so young, what is next for you? College, writing career, something else?

I have a real estate license and plan on joining a brokerage sometime in the near future. I’d like to pursue writing and real estate full time, but know that may be challenging.

How did you come up with the idea for In the Back of My Head? There’s some serious adult themes you tackle in there.

I always thought the schizophrenic twist was a bit overdone in movies. We always find out someone is hallucinating, or someone isn’t real, and I thought… What if I tell a story In which the hallucination is real.

As to the adult themes, I wasn’t abused as a kid, but I know people that were. And I don’t think it’s talked about enough. I’m not just talking about physical abuse, I’m talking about mental/emotional too. So many kids are experiencing trauma so much worse than any adult, but we shrug them off.

I feel like this book kind of calls those people out on their excuses.