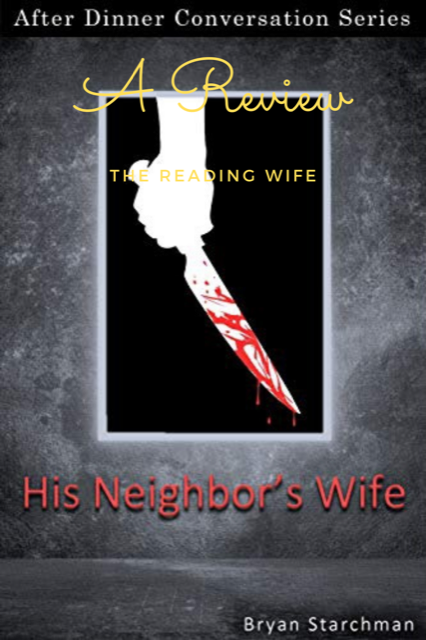 His Neighbor’s Wife from author Bryan Starchman is my latest short story that I just finished reading. This was the first story from Bryan Starchman that I’ve read, but I know it will not be the last.

Have you read His Neighbor’s Wife? Come on in and let me tell you about it!

About His Neighbor’s Wife

Synopsis – An unhappy husband kills his neighbor’s wife so that his wife will be put to death under “law of vindication.”

After Dinner Conversation is a growing series of short stories across genres to draw out deeper discussions with friends and family. Each story is an accessible example of an abstract ethical or philosophical idea and is accompanied by suggested discussion questions.

Thoughts on His Neighbor’s Wife

“As Harold waited for the Enforcers to take him to the Court of Vindication he smiled; tonight he would have the entire king-size bed all to himself.”

His Neighbor’s Wife is a short story, and a very good one. We all know how much I love a good short story with my morning coffee each day. I thought I was getting something pretty straight forward when I started reading this, but the plot twist at the end threw me for a loop, and I love that.

This was a story that made me think, and I’m still thinking about it now. A story is a story, but when it can be contemplated and discussed, it is the best kind of story, in my opinion.

I’m not going to spoil His Neighbor’s Wife for you, but the basis of it is a completely different kind of justice system than what occurs in the US and many other countries currently, and one where loopholes seem much easier to find than they are now. It is based more on the old saying “an eye for an eye” and the sentencing is much faster than it is now.

Final Thoughts on His Neighbor’s Wife

There is a list of several thought-provoking questions at the end of this story, and the interesting thing is that I found I didn’t have the answers. It wasn’t nearly as black and white for me as I had expected.

His Neighbor’s Wife got me thinking of if it would be possible to implement something between what we have now and something like what was described in the story. Where would the line between justice and cruel and unusual punishment be drawn? Part of me says an eye for an eye makes the whole world go blind. Would it improve our justice system? Cut down on crime? Or would it be an excuse to be just as barbaric and violent as the offender?

This is the kind of thought-provoking story that His Neighbor’s Wife is, and I appreciate that. I love when a story has me thinking about it, and inspires a lot more discussions about it. Which was the goal of the author and publisher.

I highly recommend you take 15 minutes out of your day to read this thought-provoking story and just think about the questions at the end yourself, and see what comes to mind.

Have you read His Neighbor’s Wife or any other writing from author Bryan Starchman? Are you a fan of short stories? Let me know your thoughts in the comments!

Bryan Starchman grew up in the small foothill town of Mariposa, CA., just outside of Yosemite National Park. He began writing short stories in the first grade and fell in love with screenwriting in high school.

Soon he tried his hand at playwriting. At UCLA, he spent four years honing his craft. There, he won the UCLA playwriting award for his satire on fraternity life. He worked as a script reader and production assistant at FOX studios for John Davis (Predator, Courage Under Fire, Grumpy Old Men, Dr. Doolittle), Bender/Spink (The Butterfly Effect, The Ring, A History of Violence) and STARZ (Spartacus, Magic City).

He then returned to Mariposa to teach American Literature, American Film, AP Language and Rhetoric, and Theatre for 20 years. He now lives in San Francisco.

His 21 published plays have been produced over 3000 times in all 50 states and Puerto Rico, 9 out of 10 Canadian Provinces (come on Prince Edward Island!) and nine more countries including Mexico, England, Italy, Dubai of the United Arab Emirates, South Africa, and Portugal.

He has also collaborated with playwright and composer Stephen Murray to create the satirical “Just Another High School Musical” and “Parents Just Don’t Understand: The Musical”·

In 2015 he was an executive producer of TEDxYosemite. The event featured eight speakers including scientists, activists, and performers throughout a full day event that included hands on activities that related to the national park.  Participants told their own stories in a StoryCorps booth and those stories went on to be cataloged at the Library of Congress.

In 2018 he was the recipient of the NBC RISE grant beating out nearly 1,000 other schools for $20,000 and his drama program was featured coast to coast on The Today Show.

In 2020 he was sponsored by the National Steinbeck Center and planned on traveling to all 50 states in celebration of the 60th Anniversary of John Steinbeck’s Travels with Charley but Covid-19 cut his travels short.

His non-fiction essays from the road have been featured in the national print magazine ROVA and his latest book, United Scenes of America: Travel Essays in the time of COVID-19 and Other Wanderings, is now available at Amazon.com.

In the past year his short fiction has been featured in The Saturday Evening Post and in the literary journals After Dinner Conversation, In Parentheses, Scribble, Apracity, Avalon Literary Review, The Good Life Review, and Litro.