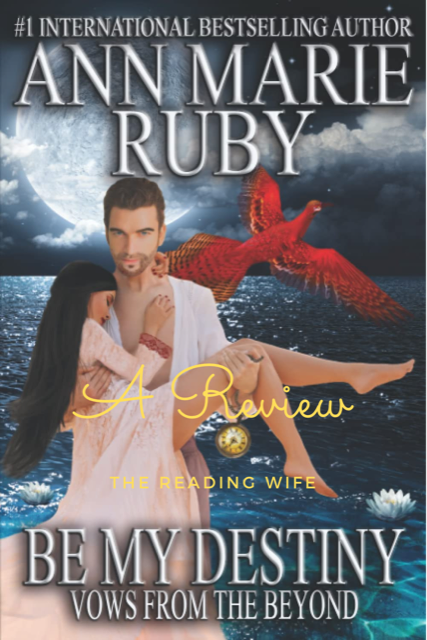 Be My Destiny: Vows From The Beyond is my latest read from author Ann Marie Ruby. This is the third book in the five part Kasteel Vrederic series, and I was very excited to start reading Be My Destiny.

Be My Destiny is the third book in the Kasteel Vrederic series. Have you read Be My Destiny? Come on in and let me tell you about it!

About Be My Destiny

Sixteenth-century secrets are buried within the walls of an old castle which on one can unveil, unless the buried come back to reveal them through the door of reincarnation in the twenty-first century.

Will they discover the answers buried hidden within the Earth or within themselves?

Along the way, they will discover one another in this infinite, immortal, and passionate romance novel.

Reincarnation is a blessing if only you are mine.

An infinite love story that began in the sixteenth century continues through the twenty-first century. This love story buried within the walls of a sixteenth-century castle can only be unveiled by the buried.

Eternal twin flames, Erasmus van Phillip and Anadhi Newhouse, infinitely searching for one another have risen from ashes like the rising phoenix, life after life, yet to be separated by destiny.

So, in this life they rise again fighting fate not to be destined to destiny, but through the mystical doors of dreams and reincarnation, they travel time calling upon one another like the singing nightingales. Who says the buried remain buried and won’t reveal all the secrets even though the walls of a castle seal them?

Now takes birth an infinite love story as these blessed twin flames awaken in the twenty-first century from the sixteenth century and say, “Be My Destiny: Vows From The Beyond.”

Thoughts on Be My Destiny

Ann Marie Ruby is a frequently recurring author in my blog, and for good reason. Her books are different from anything else I would typically read, and I love that. I always look forward to picking up one of her books to read, especially if I wasn’t a fan of my last book, because I know I’m about to read something great.

“Never give up and keep on fighting for we shall unite. Time and tide won’t keep us apart. The ocean knows of our love story. The skies are witness to this love story. Time flies by and life passes by but remember I shall always be waiting for you.”

Ann Marie Ruby, Be My Destiny

Be My Destiny is a love story, but one that also encompases family. It isn’t just about finding a lover. It is about bonds that tie us together, travel, and faith.

We travel with the characters through The Netherlands, India, and the United States on a journey of healing, learning, and searching.

I wasn’t expecting the recurring themes of family and faith in this novel, but they fit beautifully, and it reminds me I need to be there the same way for the people I care about. I want people to believe in me like they did in this novel.

Final Thoughts on Be My Destiny

One of my biggest critiques of any series is if each book can stand alone, without needing the rest. Can I pick up Be My Destiny and have it be great without reading the others first? Absolutely, I can, and that makes it even better. I am not a fan of cliffhangers in novels and being forced to read another book to find out what happens, even if it is a series.

Be My Destiny is absolutely worth the read. This entire series has been wonderful so far, but I think Be My Destiny is my absolute favorite so far. The fact that I’m enjoying each book in this series even more than the last one makes me really excited to read the fourth and fifth books.

Have you read Be My Destiny from author Ann Marie Ruby? Are you a fan of her writing? Let me know your thoughts in the comments!

Purchasing Be My Destiny

Did you enjoy my review of Be My Destiny? Need another Ann Marie Ruby novel to read? Here are my favorites!

The Netherlands: Land of My Dreams