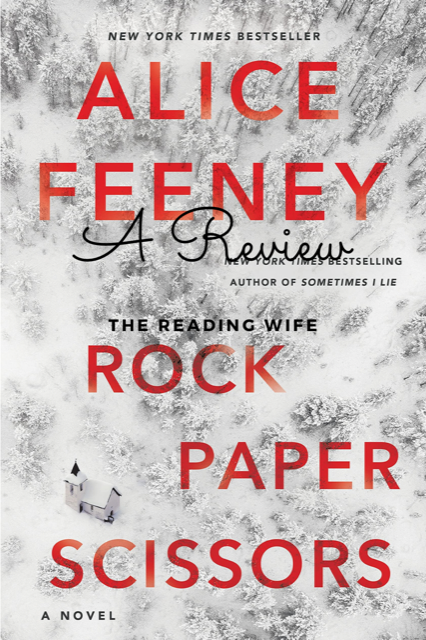 Rock Paper Scissors from author Alice Feeney is the latest novel to be checked off of my huge to be read list. This one came to me from avid fans of Alice’s work, as I was eagerly awaiting the release of Daisy Darker.

Every once in a while I will see a book, and it just speaks to me and I want to read it, even without knowing anything about it. I’m not sure why or how it happens, but I will make sure to read it. That is how I felt about Daisy Darker, and fans of Alice Feeney told me I absolutely needed to read Rock Paper Scissors.

Have you read Rock Paper Scissors yet? Come on in and let me tell you about it!

Things have been wrong with Mr and Mrs Wright for a long time. When Adam and Amelia win a weekend away to Scotland, it might be just what their marriage needs. Self-confessed workaholic and screenwriter Adam Wright has lived with face blindness his whole life. He can’t recognize friends or family, or even his own wife.

Every anniversary the couple exchange traditional gifts–paper, cotton, pottery, tin–and each year Adam’s wife writes him a letter that she never lets him read. Until now. They both know this weekend will make or break their marriage, but they didn’t randomly win this trip. One of them is lying, and someone doesn’t want them to live happily ever after.

“It feels like the terms and conditions of our relationship have either been forgotten, or were never properly read in the first place.”

I can easily see why Rock Paper Scissors came so highly recommended from Alice Feeney fans! Imagine hating your husband so much that you wanted to kill him. Now, what if he felt the same way and was planning to kill you? Marriage is never easy, but now imagine this twist!

The interesting thing about this book is that I disliked all of the characters. There was nothing to love about any of them. Normally this is a real issue for me, because there’s no real reason to continue reading if I’m not loving the characters. But Alice Feeney has a way of writing that kept me wanting to read more and find out all the secrets that each of the characters were hiding. I was really impressed by this.

I was telling my husband about this book, and the fact I didn’t like the characters. Obviously he asked me why I was still reading it, as it is often a dealbreaker for me and I’ll just move on to something better. I had to explain to him that despite not liking the characters, the writing really was just that good that I needed to see it through to the end and find out what happens. The plot was just that intriguing.

I read Rock Paper Scissors in a matter of just two days because I didn’t want to put it down, and it irritated me that I had to sleep and do “normal” things instead of ignoring the world to finish this book. If you’ve ever played the “just one more chapter” game, then you know exactly what I’m talking about.

“Having been married for so long, I know better than to think my wife doesn’t have some secrets – I certainly do – but I have never known her to behave like this. I don’t have to see her face to know when she isn’t telling me the truth. You can feel it when someone you love is lying. What I don’t know, yet, is why.”

I am already looking forward to reading my next Alice Feeney novel! I always appreciate when I read something great and want to stop reading everything else to binge everything this specific author has written, just to keep enjoying their work, and that’s how I felt when I finished this book.

Rock Paper Scissors was the first novel from Alice Feeney that I have read, but I know it will certainly not be the last! I was impressed with the style of writing and the plot twists that kept me wanting to read more. The way Alice Feeney writes, it is hard to predict what is going to happen, but the plot twists are not too outrageous, and I appreciate the way she writes.

I highly recommend reading Rock Paper Scissors if you’re looking for a good quality suspenseful thriller novel that will keep you reading to find out more.

Have you read Rock Paper Scissors or any other writing from author Alice Feeney? Are you a fan? Let me know your thoughts in the comments!

Alice Feeney is a New York Times million-copy bestselling author. Her books have been translated into over twenty-five languages, and have been optioned for major screen adaptations. Including Rock Paper Scissors, which is being made into a TV series by the producer of The Crown. Alice was a BBC journalist for fifteen years, and now lives in Devon with her family. Daisy Darker is her fifth novel.