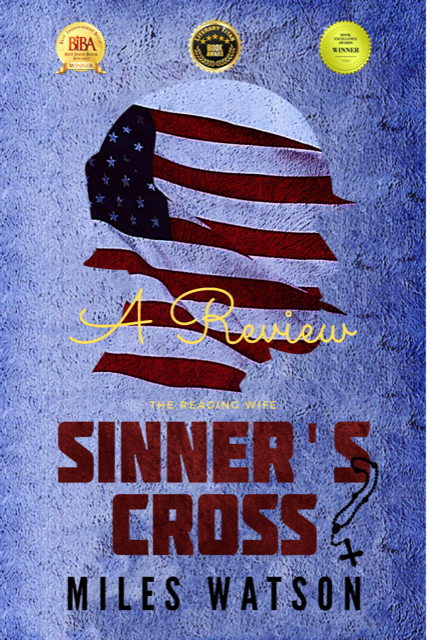 Sinner’s Cross by author Miles Watson is the latest book in my reading list that I just finished reading. Have you read any of Miles Watson’s writing?

If you haven’t read Sinner’s Cross yet, come on in and let me tell you about it!

In 1944, Sinner’s Cross was just a point on a map: a muddy track through shell-torn German woods. Worthless…except to the brass on both sides of the war, who are willing to sacrifice their best men to have it.

Men like Halleck, a tough-as-nails Texan who traded driving cattle for driving soldiers; Breese, a phenomenal actor who can play any part but hero; and Zenger, the Nazi paratrooper who discovers Hitler’s Germany is a lousy place to grow a conscience. Their lives and deaths will intersect at the place called Sinner’s Cross.

I was already hooked just based on the description of this book. I’m a huge fan of fiction based around historical events. True stories are the perfect backdrop for a good fictional story to come out of. Everybody roots for a hero in those circumstances. Needless to say, I was excited to read this book.

The problem was that I had trouble following along with the book. It was tough to get into because all three characters had the same tone to them. Miles Watson used multiple words for the same items in several places and made it difficult to follow along. An example that really took me out of the story was when Miles Watson interchanged the terms clip and magazine when describing firing weapons.

Clip and magazine are not interchangeable descriptions, and should not be used as such. You can’t fire ammunition from a clip. This is literally impossible because a clip and a magazine have completely different functions and purposes. He did this when talking about weapons as well, when referring to the Tommy Gun and the Thompson, meaning the same weapon, but called them by both names.

I am generally not a fan of having to stop my reading of a book and go grab my phone to Google things to figure out what an author is talking about. That is their job to describe in the story so a reader doesn’t have to go searching for the answers. I feel like consistency would have gone a long way toward improving my experience with this book.

However in this case, I found I did enjoy the research I did while reading the book. Fun facts… The Thompson submachine gun was invented by John T. Thompson in 1918. This Thompson gained the nickname Tommy Gun in the prohibition era, but wasn’t widely called that until about 1940.  This fully automatic weapon was invented to replace bolt action rifles in WWI. The prototype was finished as the war was ending, so it never made it to the front lines.

I got lost in reading about both the Tommy Gun and its significance in the war, along with researching war history. Sinner’s Cross prompted that research, so I can’t complain too much given that I had an enjoyable time learning about these.

What I also found was I was disappointed in the lack of character development. All the characters felt the same to me, even though their backgrounds differed significantly. Their backgrounds were discussed at a good length too. The tone still felt the same, and that was disappointing. I was hoping for a lot better and varied characters because soldiers are still people coming from different backgrounds and walks of life. They needed more personality to shine through so they would be memorable.

When I was done with this book, I went and read reviews on it to see if anyone else felt the same as I did, or if I was simply crazy and the odd one out. Turns out I was definitely the odd one, because this book had some great reviews. I felt the same way when I read The Tattooist of Auschwitz in that it had rave reviews but felt flat to me.

Would I recommend this book? Because it has good reviews, I recommend reading it to form your own opinion. No published book will appeal to everyone, and that is ok. I’m just the kind of person who is more disappointed when I fully expect to love a book and it doesn’t quite live up to the expectation I’ve developed in my head.

Unfortunately Sinner’s Cross was not a good book for me, and I was sorely disappointed in this fact. But that definitely does not mean it won’t be a book that you will enjoy. Please give it a try, and let me know your thoughts!

Have you read Sinner’s Cross? Have you ever read and disliked a popular book that everyone else raved about? Tell me your thoughts in the comments! You can read more of my book reviews here.

Miles Watson was first published at the age of 17 and has never looked back. He is now an eleven-time award winning author of three novels, a short story collection and several novellas, and has vowed to write in every genre before he’s finished. When not at the typewriter, he has worked as everything from a law enforcement officer to a Hollywood make-up effects artist, and divides his time between the West and the East Coast.