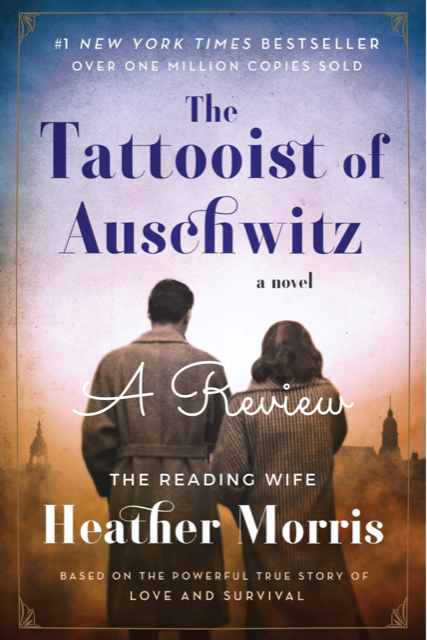 The Tattooist of Auschwitz

The Tattooist of Auschwitz is a book I just finished reading. It is based on a true story, although it is not considered historically accurate. It is simply the personal story of two holocaust survivors.

Have you read The Tattooist of Auschwitz from author Heather Morris? Come on in and let me tell you about it!

About The Tattooist of Auschwitz

In April 1942, Lale Sokolov, a Slovakian Jew, was forcibly transported to the concentration camps at Auschwitz-Birkenau. When his captors discover that he speaks several languages, he is put to work as a Tätowierer (the German word for tattooist), tasked with permanently marking his fellow prisoners.

Imprisoned for over two and a half years, Lale witnesses horrific atrocities and barbarism—but also incredible acts of bravery and compassion. Risking his own life, he uses his privileged position to exchange jewels and money from murdered Jews for food to keep his fellow prisoners alive.

One day in July 1942, Lale, prisoner 32407, comforts a trembling young woman waiting in line to have the number 34902 tattooed onto her arm. Her name is Gita, and in that first encounter, Lale vows to somehow survive the camp and marry her.

A vivid, harrowing, and ultimately hopeful re-creation of Lale Sokolov’s experiences as the man who tattooed the arms of thousands of prisoners with what would become one of the most potent symbols of the Holocaust, The Tattooist of Auschwitz is also a testament to the endurance of love and humanity under the darkest possible conditions.

Thoughts on The Tattooist of Auschwitz

One of the most prolific symbols of the holocaust is the number tattoos on the arms of prisoners. This was Lale’s job to do. When Lale tattoos Gita’s arm, it is said to be love at first sight. He vowed to survive and make a life with her outside the camp.

With the help of several others, prisoners, guards, and civilians, Lale is able to use his privilege to help others and ensure Gita stays safer than most. He does this by getting her the job and relaying messages back and forth, as well as visiting with her. It was clearly a well-known fact that they were in love and guards went out of their way, with the proper bribes, to allow them time together.

It is a love story that flourishes in the most horrific time and circumstances. They were clearly meant to be together, as they remained married until death. How can anyone not want to see them succeed and make it out to build that dream life? I know I did!

My biggest complaint about The Tattooist of Auschwitz is that all of the characters seemed very one dimensional. There is far more to them all than what is talked about in the book. More details are needed to really bring it to life. I felt this was especially true after all the hype I read online talking about how emotional the readers felt when reading it. I felt nothing.

It is a good story, don’t get me wrong. But it is not a great story. It has potential, there is no doubt about that. Because clearly Lale and Gita were extraordinary people to have not only survived the holocaust, but thrived once they escaped and were reunited.

Heather Morris, had originally written The Tattooist of Auschwitz as a screenplay and not a book. It was only later that she turned it into a book and it gained traction and popularity. I feel like if it is turned into a movie, the characters will shine far more than in the book. Lale and Gita need actors to bring them to life.

Final Thoughts on The Tattooist of Auschwitz

Many have criticized the book for not being historically accurate. It is “based on a true story” and Heather Morris does admit to embellishing it at times and changing details. It is also based on the memories of a man who is well over eighty years old that had not told his story before that.

He refused to while Gita was alive for fear she would be called a nazi conspirator for her job during her imprisonment. It is also not a story about the holocaust or the history of it. It is a personal story of two people during the holocaust. There is a difference.

Would I recommend the book? Yes, it is a good book. As I said, not a great book in my opinion. But I went into it with high expectations too. At the end of the day, it is still a good book about two extraordinary people to have made it through such a horrific experience.

Have you read The Tattooist of Auschwitz from author Heather Morris? Let me know your thoughts in the comments!

If you enjoyed this review and want more, visit my favorite books.

Heather Morris is a native of New Zealand, now resident in Australia. For several years, while working in a large public hospital in Melbourne, she studied and wrote screenplays, one of which was optioned by an Academy Award-winning screenwriter in the US.

In 2003, Heather was introduced to an elderly gentleman who ‘might just have a story worth telling’. The day she met Lale Sokolov changed both their lives. Their friendship grew and Lale embarked on a journey of self-scrutiny, entrusting the innermost details of his life during the Holocaust to her.

Heather originally wrote Lale’s story as a screenplay – which ranked high in international competitions – before reshaping it into her debut novel, The Tattooist of Auschwitz.

Purchasing The Tattooist of Auschwitz