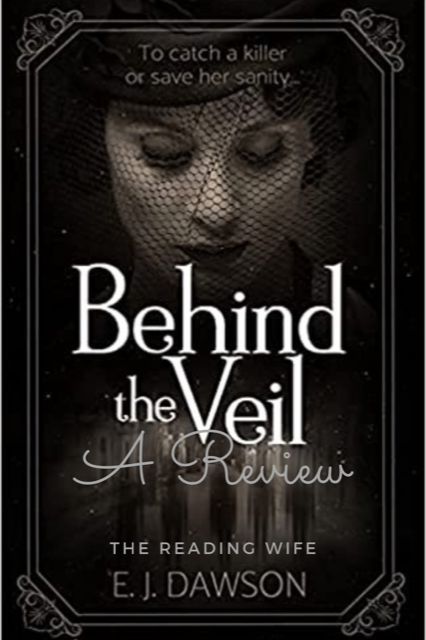 Behind the Veil from author E. J. Dawson is my latest read. I must admit that paranormal suspense isn’t my typical genre of reading, but Behind the Veil was a page-turner!

About Behind the Veil

Can she keep the secrets of her past to rescue a girl tormented by a ghost?

In 1920s Los Angeles, Letitia Hawking reads the veil between life and death. A scrying bowl allows her to experience the final moments of the deceased. She brings closure to grief-stricken war widows and mourning families. For Letitia, it is a penance. She knows no such peace.

For Alasdair Driscoll, it may be the only way to save his niece, Finola, from her growing night terrors. But when Letitia sees a shadowy figure attached to the household, it rouses old fears of her unspeakable past in England.

When a man comes to her about his missing daughter, the third girl to go missing in as many months, Letitia can’t help him when she can’t see who’s taken them.

As a darkness haunts Letitia’s vision, she may not be given a choice in helping the determined Mr Driscoll, or stop herself falling in love with him. But to do so risks a part of herself she locked away, and to release it may cost Letitia her sanity and her heart.

Thoughts on Behind the Veil

From the very beginning, Behind the Veil thrusts you right into Letitia and her abilities. No preamble, no setup, just boom, here she is and here’s what she’s doing. I had to go back and re-read the opening chapter to gain a better understanding of what was going on, but once I got used to the structure of how Letitia’s abilities were presented, it all made sense.

It’s part horror story that draws inspiration from The Exorcist and The Shining, part Murder She Wrote-style mystery, and part period romantic drama. All of these elements blend together perfectly to make a fascinating tale that I didn’t want to put down.

The heart of the story is Letitia confronting the demons of her past, figuratively at first, but literally by the time the book ends. Each time Letitia is asked to revisit a deceased person’s last moments, you learn a little more about her and the horrors that she herself experienced in her past.

Letitia’s relationship with Mr. Driscoll was incredibly well done. At first I shared in her hostility and resentment towards him, and was relieved every time he left the story. But as he became more and more intertwined with Letitia out of necessity, I found my attitude towards him changing at the same time hers did.

Final Thoughts on Behind the Veil

Behind the Veil was an absolute joy to read. The story flowed smoothly, and the characters were likable. The supernatural elements of this story felt like they came straight from a Stephen King novel, which is never a bad thing. And the final act of the book had me eagerly turning the page to see what would happen next.

I would highly recommend this book, even for those who are not typically fans of horror novels. Behind the Veil was just that good, that anyone would enjoy it!

Have you read Behind the Veil or any other novels from author E. J. Dawson? Let me know your thoughts in the comments! If you are a fan of paranormal suspense, check out my thoughts on Ravine Lereux and Tainted Harvest.

Beginning a writing journey with an epic 21 book series, E. J. started her author career in 2014 and has taken on the ups and downs of self-publishing with her fantasy series The Last Prophecy since 2016.

At the start of 2019, she put the series on the backburner to write Behind the Veil in 25 days, and signed a publishing contract for the gothic noir novel to independent publisher Literary Wanderlust. She resumed self-publishing a sci fi series, Queen of Spades released across 2020 and 2021, as well as signing another contract with Literary Wanderlust for NA fantasy, Echo of the Evercry.

Believing in more than one path to a career in publishing, Ejay pursues self-publishing alongside querying traditional publishers with multiple manuscripts.

E.J. Dawson both credits and blames her mother-by reading The Lord of the Rings aloud to E.J. twice-for her complete absorption with the world of fiction. Growing up in a haunted mansion sandwiched between an abandoned mine and an endless pine plantation should have been all the fuel E.J.’s imagination needed, but her parents filled her life with stories: about themselves, their lives, and the ones they had found through the pages of books.

Purchasing Behind the Veil