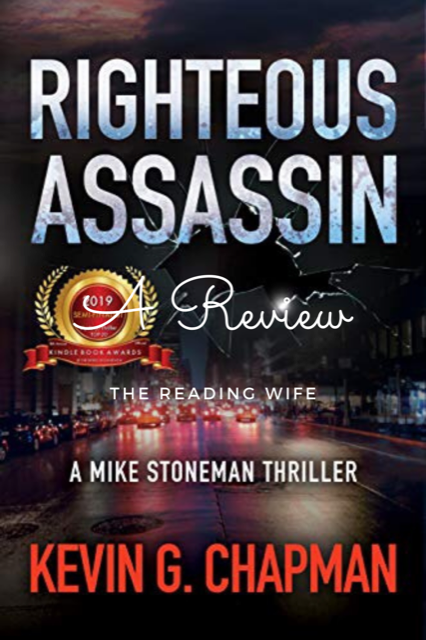 Righteous Assassin from author Kevin G. Chapman is my latest and greatest read. If you enjoy police drama, this is the novel for you! It had me hooked from the very beginning, all the way through until the end. Have you read Righteous Assassin yet?

A sweatshop owner is mutilated and left to bleed out…

A pharmaceutical baron is tortured and frozen to death…

A fashion designer is poisoned in her Upper East Side apartment…

Four months, four unsolved murders – each on the last Saturday of the month. Could these assassinations really be the work of a single killer? If it is a serial killer, is anyone safe?

NYPD homicide detectives Mike Stoneman and Jason Dickson must stop the elusive killer before he completes his decathlon of death. Each month, a new murder adds a piece to the killer’s puzzle, but even unravelling the clues and finding the killer’s pattern may not be enough to catch him.

And Mike must avoid being distracted by Medical Examiner Michelle McNeill, who seems to be on his mind a lot lately. She’s an asset to the investigation, but is this any time to be starting a romance?

Each month is a race against the calendar.  Only one thing is certain – on the last Saturday of the month, there will be blood.

Righteous Assassin grew out of a character I created for a short story writing competition in 2010.  That short story, Fool Me Twice, featured NYPD homicide detective Mike Stoneman, a grizzled veteran who has no patience for incompetence, from civilians or from other cops.

But, he found that he had a soft spot for a young girl who was apparently abused and vulnerable.  How wrong he was about her, as it turned out. The short story is included as a free bonus within Righteous Assassin, which is the story of Stoneman and his new partner, Jason Dickson, as they track a clever and sophisticated serial killer.

The story allows me to delve into the relationships between Mike and his partner, as well as Mike and his recent love interest, the NYC Medical Examiner, Michelle McNeill. Both relationships are tricky, and they intertwine, along with the chase for the killer.

Once again, Mike has some surprises in store for the reader, and for himself. It’s a fun read (and I can say that after reading it twenty times). It’s a departure from my last novel, A Legacy of One, which was a very serious political drama. This book is just fun, escapist thrills. I hope you enjoy it.

A man who bled to death after being mangled by a meat grinder. A businesswoman who died in her home after being poisoned by a quick-acting agent. Another man was found frozen to death inside a restaurant’s deep freezer. Yet one other man who was mauled by tigers in a Bronx zoo exhibit. These are the seemingly-unrelated murders that NYPD Detective Mike Stoneman has been assigned to investigate, and there are more murders yet to come.

From the very beginning, Righteous Assassin tosses you into the deep end. You don’t know who these victims are, what their relationships (if any) are to each other, nor do you know who the killer is or what his motivations are. The cops were mystified at first, and so was I, but that made the book all the more exciting to read.

You get glimpses of the killer’s mindset through cleverly-inserted journal entries that describe how he chose his victims and their unusual methods of execution. The “present day” narrative has a date preceding each chapter, but the initial journal entries describe the earlier murders.

Each victim was killed on the last Saturday of each month, the first being three months prior to the main timeline. But as the investigation progresses, each journal entry creeps closer and closer to the present timeline, adding incredible tension to the story.

Once the timelines merge together, the action ramps up into a thrilling cat-and-mouse chase. The killer is smart, and has many contingency plans to avoid capture by the cops.

Each time they think they’ve found him, he slinks away and plans his next strike. All of this leads to a thrilling conclusion that was eerily reminiscent of the final confrontation of Silence of the Lambs.

When writing a police drama, it’s easy to write something that might appear on any Law and Order episode. While some elements of that show are indeed present here, Righteous Assassin takes that foundation and runs in a whole new direction with it.

I was cheering so hard for Stoneman and his crew to find the killer before his next scheduled date, and that’s when you know that the author has you hooked. I would recommend Righteous Assassin for anyone who enjoys a well-written crime thriller.

Righteous Assassin is book one in a series of five, and I am seriously looking forward to the rest, if they are as good as this one!

Have you read Righteous Assassin or any other novel from author Kevin G. Chapman? Are you a fan of crime fiction? Let me know your thoughts in the comments! Want more of my favorite books? Click here!

If you’re interested in reading this series, check out my reviews on the rest of the books!