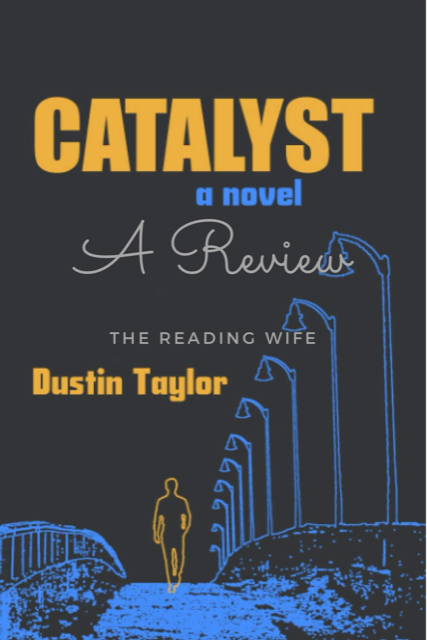 Catalyst is the debut novel from author Dustin Taylor that I just finished reading. Right now I am kicking myself for not reading Catalyst sooner.

“I don’t know what it was about that bridge. It was such a beautiful place. I loved it during the spring and summer, despite the influx of spiders that spun their webs along the railing. But it was also the place that called to me when I felt like there was no point to anything else. It was my best friend and my worst temptation.”

Have you read Catalyst from author Dustin Taylor? Come on in and let me tell you about it!

Michael Wise is in the darkest place he’s ever known. A twenty-something college dropout mired in an unfulfilling job, Michael struggles to figure out the next step in his life, drifting down a stagnant path of despair in search of joy and inspiration.

An impulsive grasp at escape takes him out of his despondency, where he learns that the darkest hour is, in fact, just before the dawn, but also that dawn is simply the start of another day. Catalyst is a story of passion and ennui, vision and depression, loss and rediscovery, and how these things are linked by the events and people that present themselves in our lives.

“You’ve just got to remember to roll up your pant legs sometimes because the shit can get very deep. It doesn’t do any good to just sit down in it and hope it passes on its own.”

I wasn’t entirely sure what I was expecting when I picked up the debut novel Catalyst from author Dustin Taylor. But let me just say that it exceeded any and all expectations I had! Right now I’m just mad at myself for not taking the time to read it much sooner.

Catalyst starts off a bit slow, as we get to know Michael Wise when he is clearly in the darkest place of his life. But be patient, because it all makes sense and is part of the story for a reason. Catalyst definitely changes as it goes.

“Some people in life are temporary, and some are lasting. Appreciate both, but when you have to make a choice, spend your energy on the ones who last.”

One of the things that struck me was just how relatable Catalyst is, and I wasn’t expecting it. It was an emotional read by the time I made it to the end. Because Catalyst isn’t just a basic novel about a guy making rash decisions and taking off to go halfway around the world just because he can.

Catalyst is the story of survival. We have all had experiences that changed us. Where there was absolutely no going back to who we were before that event happened, no matter how much we may have wanted to. Or where we were in a dark place and the journey to making it out and finding the light at the end of the tunnel.

“I compared in my mind the excitement of walking to Autzen Stadium on the day of an Oregon Duck football game back in Eugene to what it might have been like to approach the Colosseum in its heyday, coming to see the gladiators, a mock naval battle, or a classical drama.”

We all have our own stories of those experiences. Catalyst is the story of Michael Wise surviving, and learning to thrive again.

I found myself completely understanding and relating to Michael Wise when he was in that dark place in his life. I wanted to see him be successful and make those life changes many of us are too afraid to make, despite being healthier than our current choices.

I find myself annoyed at two things. The first being it took me far too long to pick up Catalyst and read it. The second being Dustin Taylor hasn’t written anything else that I can read yet. For being a debut novel, I can tell you that Dustin Taylor has a very bright future in writing ahead of him.

Dustin Taylor takes us on a journey of darkness, healing, travel, learning, personal growth, and success, all rolled up into the novel he titled Catalyst. Dustin put his heart and soul into this novel, and it shows.

Catalyst is a novel that everyone needs to read! I know this one will stick with me, long after I finished it and went on to other books. But this won’t be the only time I read it either. This is one I will return to, much like We Were The Mulvaneys is.

Have you read Catalyst from Dustin Taylor yet? Let me know your thoughts in the comments!

A native son of the Pacific Northwest, Dustin Taylor’s writing is influenced by a love of home and travel. He lives with his dog Eggo in Eugene, Oregon, dabbling in photography and enjoying the outdoors when he’s not writing. Catalyst is his first novel. You can expect to see many more exciting things from his pen in the future.

I love the opportunity to chat with an author about their writing and get to know them more, especially when we are talking about a debut novel. I had this wonderful opportunity to get to know Dustin Taylor a little bit more after reading Catalyst.

What sparked your interest in writing? How did you get started?

My kindergarten teacher always kept a bin of little blank books made from construction paper, and I liked to draw stories in those. As I got older, that turned into writing and illustrating stories.

Then, in 7th grade, my English teacher spent a lot of time teaching us how to write strong sentences and structure effective paragraphs, and while it was more in a book report/history paper sort of practice, that translated to my writing stories for fun.

Somewhere along the way, in high school I think, I quit drawing and began focusing solely on the craft of writing, and I’ve never looked back. I also remember, from a very young age, my parents told me bedtime stories where I was the valiant knight on the white horse, out to save the beautiful princess. I blame that not only for my fascination with stories, but for my hopeless romantic tendencies, as well.

Tell me about your next writing project.

Since I spent a decade on Catalyst and wrote almost nothing else in that period, I’d really like to spend some time writing short stories, just to test out some different genres and force myself to learn how to condense a bigger picture into fewer pages. I’ve started a handful, including one for a small press submission call that I really like so far.

That said, I’m also finally hashing out an idea for a fantasy series I’ve been toying with for about a year now. That’s something I’m very excited for and want to be sure I do right, so I’m really trying to spend a good amount of time building the world and the major characters before I actually buckle up and start writing.

Without going into too much detail, my goal with it – as of now anyway – is to work in a deeper and wider spread examination of mental health than what I did with Catalyst, while also making it a fun and compelling read outside those themes.

What author(s) inspired you?

I love the simple realism in Hemingway’s writing. I strive on some level to emulate his brevity, because I value economy of words, but there are times I’ll be a lot more descriptive about certain things than he typically was. While I was writing my book, I became a fan of Nick Miller, who wrote Isn’t It Pretty to Think So? (if not obvious by the title, which is the last line of The Sun Also Rises, he was also heavily influenced by Hemingway).

While our styles are similar in some ways, I really enjoyed watching him build a platform for himself online through Tumblr, posting the first three chapters of his novel and subsequent updates on his progress as he wrote, edited, and published it.

Most recently, I’ve been impressed by Hugh Howey. Sci-fi isn’t usually my choice of genre, but I love his Wool saga and his separate book, Sand. What drew me to him initially, though, is how well he’s done for himself by self-publishing his work and really just taking control of the situation to become a successful writer. Worth listening to interviews with him if you’ve got any interest in the self-publishing side of things, and I highly recommend his books. Start with Wool or Sand.

What are your hobbies outside of writing?

I got into photography about three years ago. As I mentioned, I was really into drawing before writing took over, and I realized a few years back that I missed that other creative outlet. There are times when words just don’t come, no matter how long I stare at the page, so I thought it might be helpful to have another way to work that part of my brain, and photography has been a great way to do that.

It also forces me to get out and do more exploring in the outdoors and the city and wherever else my curiosity takes me. It makes me look at things differently, find a unique perspective. Outside that, I like to read, hike, and I’ve recently started playing golf, which is always a great way to spend a few hours on a sunny day.

What is your go-to reading when you need inspiration or motivation?

Hemingway’s The Sun Also Rises and Nick Miller’s Isn’t It Pretty to Think So? are two books that I can read over and over again and will often pick up and start reading from a random point. In my opinion, they’re both incredible novels in their own ways, and they’re both authors’ first books.

Most recently, though, I’ve gotten pretty involved in the Twitter writing community, so this year I’m exclusively reading books they’ve either self- or indie-published. It’s cool to see the ideas they’ve come up with and developed to the point of getting them out to the world, without necessarily going the painstaking traditional route.

Just being a part of that community is one of the warmest things I’ve felt in years. It inspires me to keep going for it, no matter how much I may question myself or the stories I have to tell.