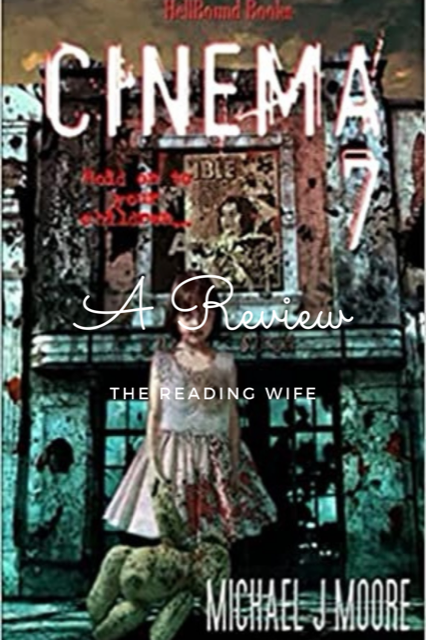 Cinema 7 from author Michael J. Moore is my latest and greatest read. Have you read Cinema 7 yet? Let me tell you about it!

Something has taken a liking to the children of Mount Vernon, Washington. Its eyes are orange, and glow like fire. Its hissing voice is the autumn wind.

It hovers over them at night, casting snake-like shadows that dance on the walls. It laughs and taunts as they cry in their beds. It says it wants to take them trick-or-treating.

Halloween is in a week.

Kyle McIntosh is hardly aware when the first four kids are abducted, their families slaughtered. Though news-vans litter the streets, his 16-year-old heart has just been broken. Night-after-night, more children are taken. More bodies are left behind.

When Kyle’s little brother claims an orange-eyed monster has been visiting him at night, ignorance ceases to be an option – because their family might just be next.

I was already hooked with the first chapter of Cinema 7. It is the stuff nightmares are made of!

“Kim had squealed with glee when James removed his father’s head with the axe from his own shed.”

I am rarely truly impressed with horror novels. Most of them are boring, just weird, or seriously lacking that true horrific quality that makes a great story. But as I said, Cinema 7 really is the stuff that nightmares come from!

Cinema 7 is great. Michael J. Moore did an excellent job of describing horrible events in graphic detail that gave me a clear picture of it all, as if it was happening on a screen or in a movie.

“Kim kicked the head as hard as she could, launching it into the air. Blood splattered out in every direction in tiny droplets as it flew toward Michael. He caught it like a football and took off running through the crowd of dancing children.”

What I appreciated about Cinema 7 is that despite being a horror novel, there was a real story to it. If you’ve ever watched a horror movie where there’s nothing besides blood and guts everywhere, that’s what I expected out of this novel originally.

But that wasn’t the case. Michael J. Moore did an excellent job of creating a well-thought story and plot within the horror that Cinema 7 is, and it is impressive.

I found myself liking and disliking certain characters, and even empathizing with one as the story progressed. Michael J. Moore made his characters and their emotions relatable and real. Cinema 7 isn’t just a horror novel, it is a good story too.

There are some serious plot twists to Cinema 7! These plot twists kept me on the edge of my seat and wanting to read more. I thoroughly enjoyed watching this story play out. The ending was not what I was expecting either.

“Once they were inside the Cinema 7, one of them pulled the door shut and they all scrambled over one another to lay into Noel Rowland with their various weapons, laughing and singing like they were having nothing more than a day at the park.”

As I read Cinema 7, I kept wondering how it would end. I wasn’t sure there would be a logical or a good conclusion to it that would actually make sense. Yet the ending made perfect sense and wasn’t what I was expecting it to be.

I highly recommend Cinema 7 for anyone who enjoys a good horror or paranormal suspense novel! This one kept me wanting to read more and is definitely worth taking the time to read. You won’t regret it!

Have you read Cinema 7 or any other writing from author Michael J. Moore? Are you a fan of horror or paranormal suspense novels? Let me know your thoughts in the comments! Read more of my favorite books here.

​​My books include After the Change (published by MKM Bridge Press), the horror novel placed on the Bram Stoker Preliminary Ballot 2019 for Superior Achievement in a Novel, Highway Twenty (published by HellBound Books) and the soon to be released thriller Secret Harbor (to be published by Black Rose Writing).

My work has appeared in Blood Moon Rising Magazine, Horrorzine Magazine, Schlock Magazine, Minutes Before Six, Terror House Magazine, Siren’s Call Magazine, Black Petals Horror/Science Fiction Magazine, HellBound Books anthology “Ghosts, Spirits and Specters”, The Electric Press, Dissections The Journal of Contemporary Horror, Soteira Press Anthology “What Monsters Do For Love”, The Point Magazine, The Huffington Post, Carecovidartresource, has been adapted for theater and produced in the Seattle area, is used as curriculum at the University of Washington and has received an Honorable Mention in the L. Ron Hubbard Writers of the Future contest.