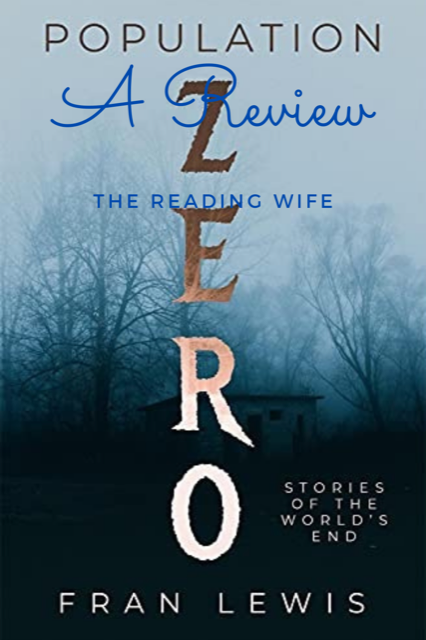 Population Zero from author Fran Lewis is my latest read.

“The gatherings, the bar groups, the people who refused to wear masks in the street or when going into stores, are just some of the people that you can all thank for what is NEXT!”

Based on that one quote from the book, I was not expecting to enjoy this story. People generally have a very black and white opinion on the masks during Covid-19.

I simply recognize everyone has an opinion and a choice. So I have no respect for anyone who shames others for their choices. Which is exactly what that quote gave me the impression this book was all about, and I almost stopped reading right there.

Thankfully I continued to read, and it wasn’t at all what I was expecting. I mean that in a good way. Keep reading to find out why I enjoyed Population Zero.

Imagine a forest so dense and so filled with trees that you cannot see anything but darkness. The smell of the dead leaves, the creatures that lived there, and the stench they created.

Imagine smashed windows and abandoned satellite dishes and blocks of plaster all over the ground.

In Population Zero by Fran Lewis, we experience several post-human worlds through the eyes of people who were allowed to visit for one day. A world covered in ice, a world in complete darkness, a world where deserts are plentiful, and others…

Population Zero from Fran Lewis is a short book, at only 76 pages. It is a collection of short stories where Fran Lewis uses her imagination to encourage the reader to use theirs. Each story is a different scenario of how the world may look post-Covid.

These stories are something that the reader can break up into sections each day over breakfast instead of a newspaper, or simply sit down and read them all at once. If you’ve ever read my thoughts on Beautiful, Complicated Family, Like Only a Woman Can, or Two Turtle Doves, then you know I love a good short story that I can read over breakfast or with my morning coffee. It takes a special skill to write short stories because every single word counts.

“Living in this world is different. But what happens when it all ends? Water is paramount for our survival. The next time you get a bottle of water out of the fridge, wash your face, brush your teeth, or go for a swim, think about what would happen if it all disappeared.”

Population Zero is a short book that really encourages the reader to think more about these scenarios, and I appreciate that. I love a book or short story that gets me thinking about things in a more in-depth way.

I have very mixed emotions on Population Zero. Being a prepper, thinking about these things makes perfect sense to me. Because all of us try to prepare for a world similar to the things Fran Lewis described in this book. I always hope for the best, but prepare for the worst at the same time. Her imagination definitely took the reader into the worst case scenarios, so it gets the brain thinking.

The part I didn’t like was the mask shaming aspect of it, which was a theme repeated several times. To me, that is nothing but a scare tactic. I don’t need to pay money to find scare tactics. I can simply open up any social media platform or the news and get all the scare tactics, mask shaming, arguments, and conspiracy theories I want for free, with no end in sight.

I’m not sure if this was the goal when Fran Lewis wrote these stories, but it was a theme that stuck out to me and left me with such mixed emotions. Personally, I feel that if she had left out the mask shaming theme, I would have enjoyed Population Zero even more.

It’s still a good collection of post-apocalyptic scenarios, and I enjoyed it. I just wouldn’t have used a novel as a place to promote scare tactics and shaming others for their choices to wear a mask or not. There’s plenty of that elsewhere and it didn’t add anything to these stories.

Have you read Population Zero from Fran Lewis, or any of her other writing? Let me know your thoughts in the comments!

I am Fran Lewis the author of My Name is Bertha, Bertha Speaks Out and soon to be released Bertha Fights Back.

Growing up in the Bronx was great for my family and me. My sister and I had different interests, different friends but one thing stands out, and we lived in a neighborhood with people from many different ethnic backgrounds. When we were growing, everyone seemed to get along and no one really cared whether you were African American, white or any other race or nationality.

My parents owned a dry cleaners in the Bronx and so did all of my uncles and grandfather. I loved working in my father’s store and going to my grandfather’s on 180th street and Mohegan Avenue in the Bronx.

Going to school in the Bronx, you learn how to get along with everyone in school and your neighborhood. No one ever cared where you came from or what you looked like. You were accepted for who you were as a person.

However, being overweight made things difficult for me and I often felt left out of many things that other kids could do. Being a total klutz did not help. I wrote these stories to teach children that we need to go back to the days when I grew up and everyone got along.