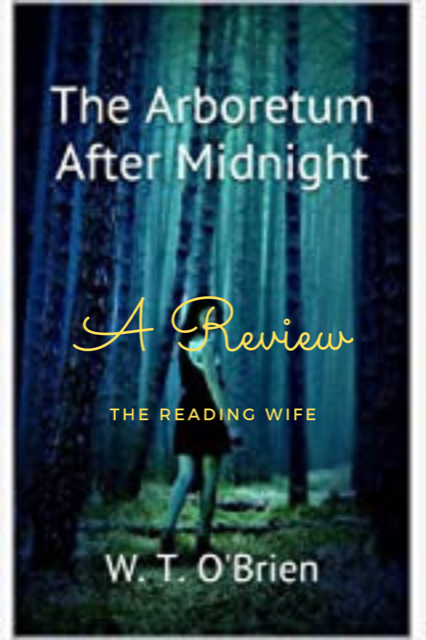 The Arboretum After Midnight

The Arboretum After Midnight is the latest novel to be completed from my to be read list.

Have you read The Arboretum After Midnight? Come on in and let me tell you about it!

About The Arboretum After Midnight

Whitney Colliers is an astonishingly beautiful woman. Moving amongst creative people, and fronting a well-known design studio, she has plenty of admirers and almost as many lovers. A tease to everyone, she delivers on her advertising.

Beautiful, admired, but not well loved. There are plenty of people with a grudge against Whitney. After creating her usual friction at a party, she solicits a ride to a local park to give her dog a run.

The next morning a jogger comes upon her body, tangled in her dog’s leash and sprawled in the rockery. It looks like a tragic accident, but rookie detective Roscoe Romar quickly concludes that it’s murder.

Thoughts on The Arboretum After Midnight

Max Zastera is an emotionally-stunted man who nonetheless has puppy love affection towards Whitney Colliers. He would do anything to get her to notice him. So when Whitney asked Max to drive her and her dog to the park, Max eagerly obliged.

When Whitney turns up dead the next morning, Max is of course the primary suspect in her murder. But evidence quickly shows that Max is innocent, leaving the police baffled. Who else could want to murder this woman walking her dog in the park after midnight?

That’s the question that The Arboretum After Midnight spends an inordinate amount of time asking. After all, Whitney had many admirers and just as many rivals. The list of potential suspects is staggering.

Was it someone at a party she had attended the previous night? Was it someone she used to work with? Could it be a former lover (of which there were many)? Perhaps a family member? Or was it someone else entirely?

Unfortunately, this book meanders all over the place, often losing its focus. What should have been a compelling murder investigation turns into a festering mess. All of the characters are dull and have no distinct personalities. It was a chore to watch the police whittle down the list of suspects one by one.

By the time the murderer is revealed in the final pages, I had lost all interest in finding out who it was. Mystery novels are supposed to be as much about the journey as the destination, but in this case, the journey was a slog and the destination was somewhere I didn’t care to be.

Final Thoughts on The Arboretum After Midnight

The copious amount of grammatical errors in this book also took me completely out of the story repeatedly. Sentences that were phrased as questions should have had a question mark. The author also used Roman numerals as chapter headings…except that he used them incorrectly. “XXXXX” was used to represent the number 50, as an example, instead of “L.”

The book is set in and around the Seattle area. Being a Pacific Northwest native myself, I could appreciate it when the story took the characters through the small towns scattered across Washington and Oregon that I myself have driven through. The references to the classic Seattle Mariners teams of the mid-to-late 1990s were also a pleasure to read about.

That’s about the only positive acclaim I can muster for The Arboretum After Midnight.

Have you read The Arboretum After Midnight or any other writing from author W. T. O’Brien? Let me know your thoughts in the comments!

W. T. O’Brien has written short stories, novels, and screenplays. Prior to being a full time writer, he has worked at an extensive number of occupations from which to draw experiences.

O’Brien is a lifelong resident of Greater Seattle, now living just north in Mountlake Terrace, WA. He enjoys living with his endearing wife near his large family in the surrounding area.

Purchasing The Arboretum After Midnight