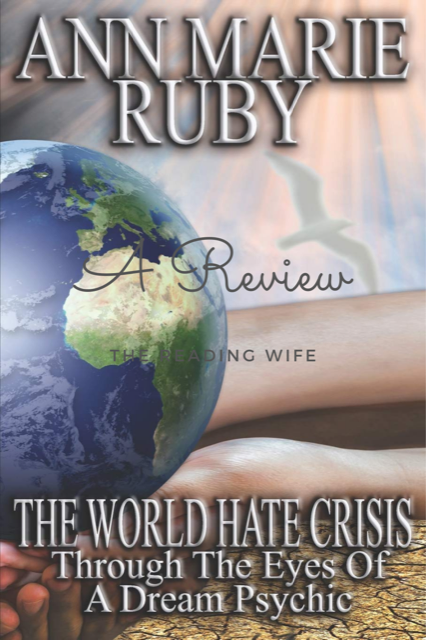 The World Hate Crisis from author Ann Marie Ruby is my latest and greatest read. This is the second book from Ann Marie Ruby that I have had the privilege of reading and reviewing.

The World Hate Crisis is very different in comparison to the last book I read of hers, Spiritual Songs II.

About The World Hate Crisis

Teardrops of a mother but fall as we watch her children fighting amongst each other and hiding out of fear for being different. Race, ethnicity, ancestry, religion, sexual orientation, disabilities, gender, and gender identity have but become apocalyptic for the victims of hate crimes.

The perpetrators of these crimes walk with heads up as they but grow in number. Today, they are brewing up an apocalypse, for they are but the might of the dark night. Let dawn awaken you and all to the humanity we the humans have but lost within this journey throughout time.The World Hate Crisis: Through The Eyes Of A Dream Psychic

Thoughts on The World Hate Crisis

The World Hate Crisis is the kind of book that really made me stop and think about the world we all live in.

What causes hate? Hate is defined as ‘an intense or passionate dislike for someone.’ For me it takes a lot of energy to actually hate someone. To be that intense or passionate about it. That also requires some sort of action on their part to cause that. Usually a crime or their words, or even something horrible they’ve done to me. I can’t quite imagine hating someone just for their skin color, religion, or even political views.

Hate is a learned behavior. Where do humans learn to hate? Everywhere. School, home, church, friends, the news. The list goes on. How do we combat this issue? It all starts with ourselves. Each of us has complete control of ourselves and our choices. Start there. Set a good example, be a good person, show love instead of hate.

The World Hate Crisis is an excellent reminder of these things, and I really enjoyed reading it. As I said earlier, it made me think about things. About the world, and even my own behavior. The result is it reminded me to pay attention to how I treat others around me. Even something as simple as talking to a cashier in a grocery store.

When I stop and think about people, we are all really the same. The skin color or language spoken may be different, absolutely. But the basis on how we live our lives is very much the same. The goal is to make a living, raise a family, be productive members of society, live peacefully and be happy. The ways we each do this can differ, but the end goal is still much the same.

Where did humans forget that we are all just that, humans? That is what this book made me ask. My goal is to learn about those who are different. We can all learn something by simply asking questions or talking to someone who is different. That doesn’t mean we need to adapt their way of life or choices. It simply means that we are allowing ourselves to understand differences and not be ruled by fear of the unknown.

Another thing I find difficult to understand is the concept of hate crimes. The fact one person or a group can hate another passionately enough to commit a crime is kind of astounding to me. I know it happens often, but that kind of hate seems foreign to me.

Would I recommend this book? Absolutely. I always appreciate books that get me thinking about things and that inspire even small changes within myself. It was enlightening to read details of some of her experiences with hate and hate crimes, from a different perspective.

How many times do we really take the time to see an event through the eyes of another person? This book affords that opportunity at several points.

Have you read The World Hate Crisis or any other novels from author Ann Marie Ruby? Let me know your thoughts in the comments!

Ann Marie is an American who was born into a diplomatic family traveling the globe and grew up in Brisbane, Australia as her father was a student at The University of Queensland. She lived in the Washington DC area, but later settled in Seattle, Washington where she currently resides.

In her spare time, when not writing books, she loves to meditate, pray, listen to music, cook, and write blogs.

Did you enjoy the review of The World Hate Crisis? Need another Ann Marie Ruby book to read? Here are some of my favorites!