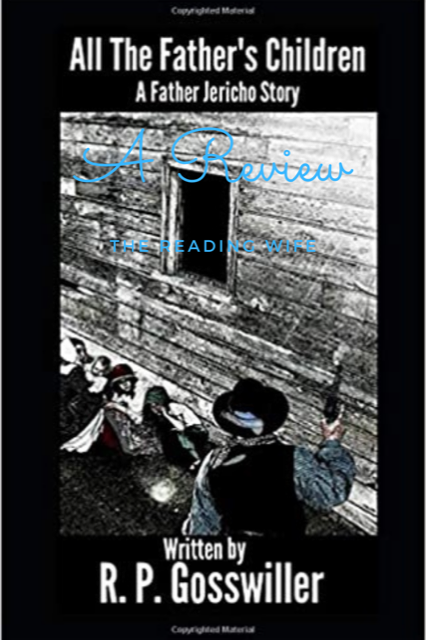 All The Father’s Children

All The Father’s Children is the second book by R.P. Gosswiller in the Father Jericho series. I was very excited to start reading it, and continue learning about all of my favorite characters from the first book, The Price of Silver. This is rapidly becoming one of my favorite book series to read.

I must admit that western themed books aren’t usually my thing, but the series and the characters have captivated me as I watch them grow and develop in each book. The Father Jericho series is absolutely worth taking the time to read!

Have you started reading the All The Father’s Children in the Father Jericho series yet? Come on in and let me tell you all about it!

About All The Father’s Children

Father Jericho is a bounty hunter with a haunted past. Once a priest who bent the rules, he is now a bounty hunter who breaks them. On the road to revenge, and possibly his own redemption, he will burn down the frontier in search for the outlaws who murdered his family and shattered his life…

The trail is cold, but Father Jericho is lighting a fire as he beats his way through the frontier’s underworld. But a mysterious force is stealing the children away, making them disappear into the night…

Putting his own mission on hold, Jericho, along with his awkward partner, is struggling to find out what is happening to the kids of the territory. What he finds will burn him to his core, and he will struggle to protect all of the Father’s children, before it is too late…

Thoughts on All The Father’s Children

As always, it is set in the wild west. Complete with guns, violence, and many climactic confrontations. We start out with Father Jericho in All The Father’s Children, still on the hunt to dispense some justice and revenge. But his journey is interrupted with another problem far bigger than him.

There is a mysterious force kidnapping children from the area, using the cover of darkness to remain in the shadows. Father Jericho is forced to confront the worst of the worst in this book, to protect the children.

R.P. Gosswiller brought back many familiar characters, and some new ones. My favorite, Scar, had a much more prominent role in this book and provided some much needed comic relief. I thoroughly enjoyed him in this book, watching him evolve and getting to know more of his personality.

All The Father’s Children also brought us a new and interesting villain, with a larger than life personality, who is determined to make it big and be a well-known name. Unfortunately, that determination to be so big will be his downfall.

Final Thoughts on All The Father’s Children

I highly recommend the Father Jericho series! I thought The Price of Silver was great, but All The Father’s Children has even surpassed that, because now I get to see all of my favorite characters returning and it just gets better with each novel.

Have you read All The Father’s Children, or any other writing from author R.P. Gosswiller? Let me know your thoughts in the comments!

R.P. Gosswiller is a world traveled adventurer who spends his free time exploring Texas. Once a wildland firefighter and disaster responder, he now sails the world as a Merchant Marine. He enjoys playing hockey and doting on his two love-spoiled children. He has been writing his entire life and plans on writing until the day the coroner pronounces him dead…

Purchasing All The Father’s Children

Did you enjoy the review of All The Father’s Children? Need another R.P. Gosswiller book to read? Here are some of my favorites!

I had another chance to sit down and chat with R.P. Gosswiller about the second chapter in the Father Jericho series.

Scar makes a far more prominent appearance in this book. Does that trend continue in future books?

Scar is the self proclaimed partner to Father Jericho, and is becoming more of his own hero as time comes along. He is planned to be a staple within the series.

Is Scar really eccentric or a bit on the slow side?

Scar is Scar hahaha… I like to leave certain characters open to the readers, and he is one of them. Keeping his past short, and his personality grandiose. I would not say that he is slow. Eccentric may not be the right word either. He is unique.

My favorite character would be Father Jericho himself. He is fun to write. He presents the darkness that dwells within us all, and shows the horrors of what we can endure and in turn commit. Plus, I enjoy a story about someone pushing through their pain. He is slightly feverish, and as time goes along he will become more so, but that is one of the fun quirks. I love who he is and what he represents.

Now, my favorite character to write is Seneca Jones. But I cannot delve too deep, as I do not wish to spoil his story. But Dr. Jones is a man many many years in the making, and is a far reaching character with a lot more influence than it at first appears….

Seneca Jones is certainly an interesting character. He is one who stood out prominently in your first book. I kind of like the mystery that surrounds him…

And that mystery will only grow. Lol. Especially after the next book.

So we get to see more of him! That’s awesome.

I always wonder how Father Jericho keeps going through all of his injuries. Is it anger, revenge, or something else that pushes him?

Rage is his biggest drive. A thirst for vengeance. He is more elemental than human, in my mind’s eye. A creature of pure pain, he won’t allow himself to die. A slightly insane doctor helps, as well.

I find it interesting that he can set aside his own quest for vengeance in this book for the greater good, to deal with a much bigger issue at hand.

Part of who he has always been, to be honest. Father Jericho has a strong sense of right and wrong. It is slightly skewed, but it is there. And he will always help innocent people. Well, almost always.

I like that black and white perspective of right and wrong. Helping others certainly adds to the depth of his character.

Thank you. He has a lot of layers, and more of his character will come out.

Seeing characters develop and reveal more as time goes on is really enjoyable. I actually noticed that in one of Nathan’s video games recently. The character development was surprising.

It’s the best part of storytelling.

When can readers expect the next book?

Right now I am almost done writing a stand alone science fiction book, about mercenaries and betrayal, action and loss, and humor in the darkest of times.

But in the next Father Jericho book, “Sins of the Father”, we deal with the deadly sin of lust. Men are dying, and our beloved bounty hunter gets dragged into the hunt for the murderer.

There will be a US Marshal making an appearance, to both help and get in the way, and Scar is still out East looking for the still missing children from the last book. There will be a betrayal by someone Jericho holds to a higher standard, and you will have to wait for the book to see how that affects him.

Oh…. When? Okay, I’m not so sure. I plan on “War Pigs” being published around April, so the next Father Jericho book will most likely be close to July.

I am very excited for July so I can get my hands on the new book, Sins of the Father! Tell me a little about “War Pigs” since this is your current project, but not part of the Father Jericho series.

A woman who owns a mercenary company is low on funds and needs soldiers, so she hires a pack of degenerates and war criminals, a real pack of psychopaths.

But they eventually get wrapped up in the galactic civil war, and find something dangerous that puts them smack in the middle of it all. Captain Giselle soon learns that she bit off more than she could chew, and has to face her inner demons and choose a side…

You are certainly busy with two new books coming out before summer is over!

I like pushing myself. Next week is my first game, playing lacrosse on the city team. Plus I just started kickboxing. Plus work is picking up, and I’ve been looking into going back to school. I thoroughly enjoy climbing the mountain, so to speak.

I am certainly looking forward to both of your new books coming out and reading them! Thank you for taking the time to chat with me about your writing!