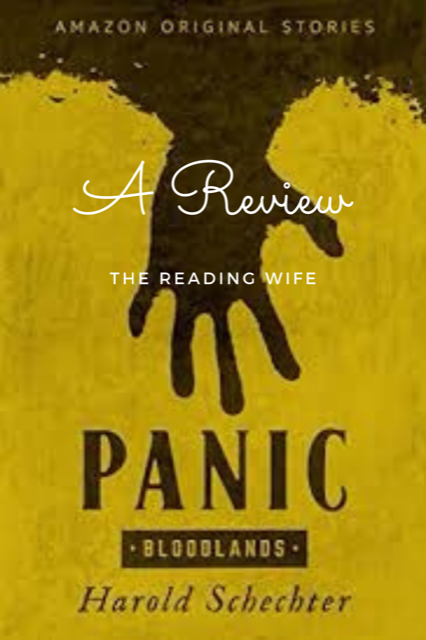 Panic is my latest short story, that is part four of a six part series from true crime author Harold Schechter.

Have you read Panic? Come on in and let me tell you about it!

During the Depression, economic anxieties found an outlet in a series of child murders that triggered an irrational nationwide hysteria: pedophiliac psychopaths were overrunning the country.

As America was brought to rage and fury by the press and the FBI, lynch mobs took to the streets, reason gave way to doomsday scenarios, and one father was even driven to murder his three daughters to “save them” from a degenerate crime wave. A terrifying cautionary essay, Panic explores the combustible mix of unfounded fears, moral crusades, and the dangers of collective thinking.

Panic is part of Bloodlands, a chilling collection of short page-turning historical narratives from bestselling true-crime master Harold Schechter. Spanning a century in our nation’s murderous past, Schechter resurrects nearly forgotten tales of madmen and thrill-killers that dominated the most sensational headlines of their day.

Panic was a chilling and very cautionary story. It is interesting to read this, and then see how much the media and panicking can really influence the decisions we make. Mob mentality is a legitimate thing, and a very scary one at that. A peaceful protest can turn into a full blown riot in the blink of an eye.

It is interesting to look at now versus in 1937 when all of these events were occurring, and see many similarities. These days we just have social media, so the horrific stories reach us faster than they would have back then.

This story took me a little more than an hour to read, and I enjoyed it. But I always enjoy a good true crime story. One of my favorite aspects of this series is that it can be read before bed each night, and that is exactly what I’ve done this week. The length of each story means I’m not up half the night because I can’t stop reading either. If you’ve ever played the “just one more chapter” game and suddenly it is 3am, then you know exactly what I’m talking about.

Harold Schechter has an interesting way of delivering each of these stories, and in a non-scary, almost clinical way. I appreciate the way he writes, because it is truthful without being disgusting or vulgar in any way. The stories themselves are horrific and oftentimes infuriating, but that is because of the truth, not the way it was delivered to the reader.

Panic is a story that absolutely deserves to be read, right along with the rest of the Bloodlands series from author Harold Schechter. If you enjoy true crime stories, then this is the series you don’t want to miss!

I appreciate that these stories have all got me thinking about both the events that triggered the stories, but about the present, and reactions or if anything has changed since then. History leaves us many lessons and I think that has been my biggest take-away from the Bloodlands series.

Have you read Panic or any other writing from author Harold Schechter? Are you a fan of true crime stories? Let me know your thoughts in the comments!

Did you enjoy my review of Panic? Need more from Harold Schechter? Here are my favorites!