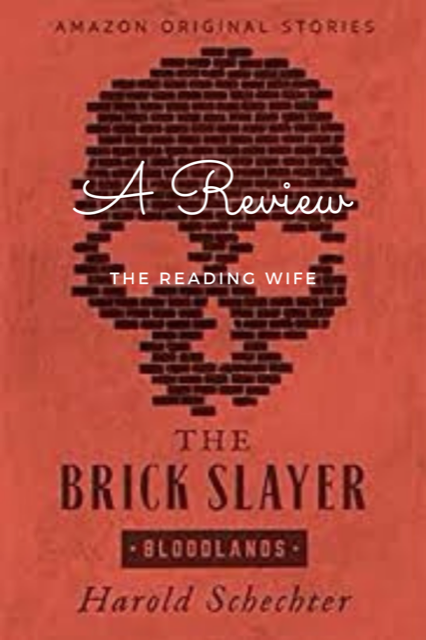 The Brick Slayer is my latest short story, that is part three of a six part series from true crime author Harold Schechter.

“The entire homicide squad of twenty four detectives, augmented by four squads of regular detectives and fifty men from the Metropolitan Division, were assigned to the case. There was no donut in the minds of police that they were dealing with the same perpetrator responsible for several earlier, identical assaults, the criminal who had come to be known in the press as the “Mad Brick Slayer”.”

Have you read The Brick Slayer? Come on in and let me tell you about it!

About The Brick Slayer

A series of brutal home invasions terrified Los Angeles in 1937. They ended in Chicago a year later with the arrest of African American teenager Robert Nixon, igniting racial tensions in an already appallingly divided city.

Tortured in custody and portrayed by the press in the most lurid and flagrantly racist terms, Nixon faced an all-white jury. It would be the fastest conviction in the history of Cook County. Used as inspiration for Richard Wright’s classic social protest novel, Native Son, the case against Nixon is a still-relevant examination of bigotry, suppressed rage, and the making of a murderer.

The Brick Slayer is part of Bloodlands, a chilling collection of short page-turning historical narratives from bestselling true-crime master Harold Schechter. Spanning a century in our nation’s murderous past, Schechter resurrects nearly forgotten tales of madmen and thrill-killers that dominated the most sensational headlines of their day.

Thoughts on The Brick Slayer

The Brick Slayer is a short story, taking roughly an hour to read and is the third in a six part series from true crime author Harold Schechter. One of my favorite things about short stories is they don’t keep me up reading past my bedtime. If you’ve ever played the “just one more chapter” game and suddenly it is 3am, you know exactly what I am talking about.

The Brick Slayer was a tough read for me, especially in comparison to the previous two books in the Bloodlands series from Harold Schechter. It is still a true crime story, and is depicted quite well through the story.

I personally have to really take a step back and remember the time period this story happened in, which was the 1930’s. Otherwise it was absolutely infuriating. Well written, but just the attitudes and words used by people back then is the infuriating part. I grew up in a racist family, and had to tolerate it, but I still can’t stand language used like that.

African Americans being referred to as “colored” or darky” was terrible. The idea that a rape of a white woman by a black man was more traumatic than if a white man had done it, or simply that white men don’t assault women. My favorite one (sarcasm) was where it was noted that the use of marijuana was to blame for black men becoming violent and raping white women.

Another issue I took was the sheer volume of resources used to “round up” African Americans for questioning. All you had to do to be a suspect was walk down the street.

It is extremely obvious that Robert Nixon did not get a fair trial, by any stretch of the imagination. It is easy to look back when I read things like this and see why we’ve had riots and outrage over actions like these, even within my own generation.

Final Thoughts on The Brick Slayer

Once you get over how disgustingly and appallingly racist this story is, it is a really good story. It certainly captured my attention and got me thinking about time and the way others are treated just for being different in our country.

I recommend reading The Brick Slayer if you have an hour to spare in your day. You will not regret it.

Have you read The Brick Slayer or any other writing from author Harold Schechter? Are you a fan of true crime stories? Let me know your thoughts in the comments!

Did you enjoy my review of The Brick Slayer? Need more from Harold Schechter? Here are my favorites!