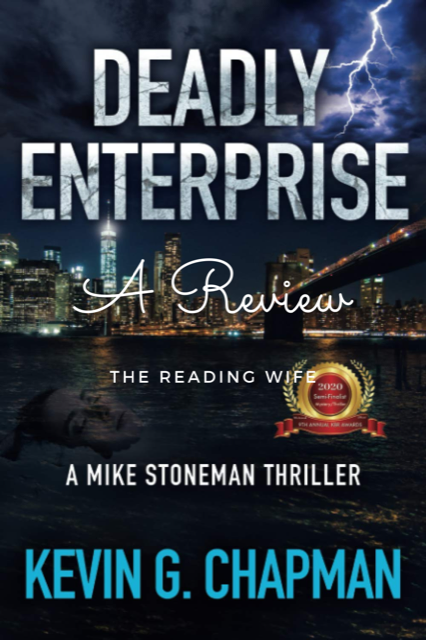 Deadly Enterprise from author Kevin G. Chapman is my latest read, and I am hooked on the Mike Stoneman series! This is a series that I am very excited to finish.

Have you read Deadly Enterprise? Come on in and let me tell you about it!

The dead girl they fished out of the east river was a drug addicted hooker, so nobody really cared. Except that Medical Examiner Michelle McNeill thinks it’s a murder, and NYPD Homicide detective Mike Stoneman agrees.

Every death is a tragedy, and every murderer should be exposed, even when nobody wants to hear about it. When Mike and his partner, Jason Dickson, start to dig into the case, they find that there may be other cops protecting the criminals – or maybe they are the criminals.

And one of them might be Mike’s former partner. In order to uncover the truth, Mike and Jason have to go outside the lines, and risk their own reputations, jobs – and lives. This case is one that Mike can’t walk away from, no matter how much he wants to.

Deadly Enterprise is book 2 in my Mike Stoneman Thriller series. This book picks up Mike’s story shortly after the events of book 1, Righteous Assassin. Mike is recovering from shoulder surgery after his nearly fatal encounter with serial killer Ronald Randall.

Meanwhile, his partner, Jason Dickson, has a new partner, who is a brash and reckless young detective. While Jason deals with being the senior detective on the team, he and Ray are assigned to investigate a high-profile and racially sensitive murder of a Bronx bodega owner.  But, there is also the case of the young woman whose death was deemed a heroin overdose.

She was a hooker who was fished out of the river.  Nobody thinks this is an important case, except that M.E. Michelle McNeill thinks the case looks like murder. The story follows both investigations, and allows the reader to learn more about Mike, Jason, and Michelle. Stay tuned for the next installment in the Mike Stoneman Thriller series in 2020.

Right away, Deadly Enterprise shows that it’s going to follow a different pattern than Righteous Assassin did. In the previous book, the identity and motivation of the killer remains a mystery until late in the story. Here, we know who they are and what they’re doing from the get-go.

There are two concurrent murder investigations happening throughout the book. The narrative switched back and forth between them with ease, and it never felt forced when one investigation was brought to the forefront.

Early on in the story, protagonist Mike Stoneman is sidelined while he recovers from injuries taken during the previous book, allowing his partner Jason Dickson to take center stage for a while. Racial tensions are a huge undercurrent of this book, and because Jason is a large black man, he takes the brunt of it.

As was the case in the previous book, the author displayed intricate knowledge of the New York City culture and neighborhoods. I have never been to New York myself, but the way he described each intersection, park, diner, and dark alleyway made me feel that I was right there with the characters.

The conclusion of the story is just as thrilling as the previous novel, leaving me eager to read more about Stoneman, Dickson, and the rest of the NYPD force in the future.

Imagine a Law and Order SVU episode with a lot more profanity and a lot more violence, and that’s pretty much what you get with Deadly Enterprise. There’s no sugar coating any of the nastier bits that police unfortunately have to encounter in their jobs.

Deadly Enterprise is book two in a series of five that follow Mike Stoneman, and I am seriously hooked on this series. I’m ready to read the third one already!

I highly recommend Deadly Enterprise for anyone who enjoys a good thrill ride. You won’t be disappointed!

Have you read Deadly Enterprise or any other novels from Kevin G. Chapman? Let me know your thoughts in the comments!

Did you enjoy my review of Deadly Enterprise? Need another Kevin G. Chapman novel to read? Here are my favorites!