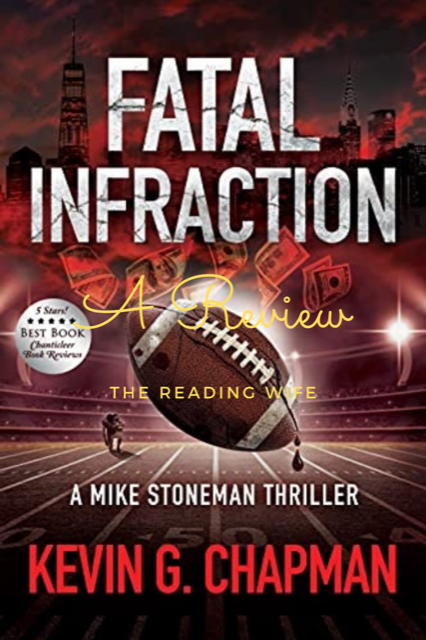 Fatal Infraction is book number four in a five part series from author Kevin G. Chapman, and I just finished reading it. Have you heard of Kevin’s Mike Stoneman series? If not, let’s talk about it! The Mike Stoneman series is one you’ll definitely want to read.

Have you read Fatal Infraction? Come on in and let me tell you about it!

He took a knee for social justice. Now he’s dead.

Controversial quarterback Jimmy Rydell’s body was found naked – on the Central Park carousel. Who killed him? How did he get there two days after he disappeared? . . . And why was the body frozen?

Jimmy’s team just wants to move on, after collecting on the $20 million insurance policy. Jimmy’s teammate – the one who threatened to kill him – swears he wasn’t there. Jimmy’s bodyguard had the night off.

Somebody is going down for this if NYPD homicide detectives Mike Stoneman and Jason Dickson can find a theory that explains all the bizarre facts. They just hope the case doesn’t tear the team, and the City, apart first.

Life as a homicide detective is rarely simple, but the latest entry in the Mike Stoneman series takes so many twists and turns that your mind is left boggling.

A bizarre murder of a star NFL quarterback is the hook that gets this story rolling. The victim, Jimmy Rydell, is a combination of Colin Kaepernick and Johnny Manziel–part humanitarian and social justice warrior, and part womanizer, drinker, and party animal.

The contradictory nature of Rydell’s character was hard for me to swallow, but that also meant that the list of potential suspects was much larger than in a typical murder mystery. Was it an angry southern racist redneck? Was it a mafia hit? Or was it someone affiliated with another NFL team looking to hurt a rival squad?

The motivations of all the potential suspects are all presented realistically, and it was a joy watching Stoneman, Dickson, and the rest of his department try to reason out what actually happened to Rydell and who could have done it. The myriad of possibilities had me guessing until the very end.

As is typical with the Stoneman series, Fatal Infraction’s pace never lets up, but it never feels overwhelming. The focus of the story remains clear throughout, despite the enormous tangle of threads as the mystery unfolds.

Fatal Infraction introduces a new character into the Stoneman saga: Graham Beckwith, a proper English gentleman who takes great pride in his immaculate appearance. An auditor for Rydell’s team’s insurance company, he attaches himself to the investigation to make sure the circumstances of Rydell’s death didn’t violate his life insurance policy.

Beckwith provided much-needed comic relief, and the image of him confronting a pair of befuddled, heavily-muscled goons with nothing more than his proper diction is not one I’ll forget anytime soon. I hope Beckwith will be appearing more in future Stoneman books.

Writing one quality police investigation story is impressive enough, but Fatal Infraction makes four home runs in a row for author Kevin G Chapman. I’ve immensely enjoyed getting to know all of the characters, and I can’t wait to read the fifth book in the series.

Have you read Fatal Infraction from author Kevin G. Chapman? Are you a fan of the Mike Stoneman series? Let me know your thoughts in the comments!

Did you enjoy my review of Lethal Voyage? Need another Kevin G. Chapman novel to read? Here are my favorites!