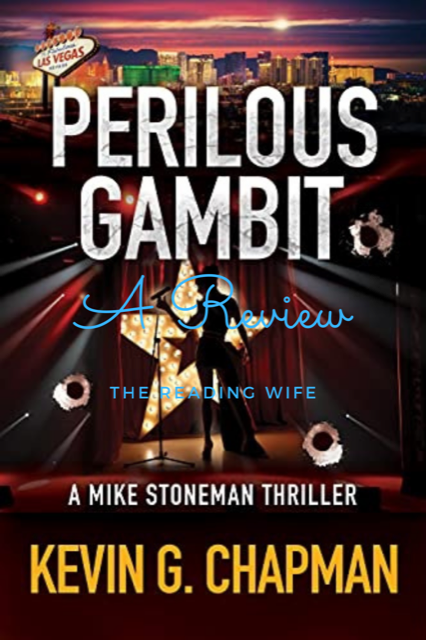 Perilous Gambit is book number five in a five part series from author Kevin G. Chapman, and I just finished reading it. Have you heard of Kevin’s Mike Stoneman series? If not, let’s talk about it! The Mike Stoneman series is one you’ll definitely want to read.

Have you read Perilous Gambit? Come on in and let me tell you about it!

A murder can sure put a damper on a Vegas wedding party.

An unexpectedly hurried marriage in Las Vegas was not what Jason and Rachel planned, but circumstances made it their best option. At least Rachel would have her brother, Jackie, there for the happy occasion. Jason had to find out eventually that Jackie is a drag performer. That surprise turns out to be the least of Rachel’s worries.

When the star of the drag show is murdered and Jackie is accused of the crime, Jason and his partner, Mike Stoneman, find themselves out of their jurisdiction and all-in on a complex case that stretches from Nevada to New York to South Dakota and back again. When somebody tries to kill Jackie, being arrested and having to miss the show take a backseat to staying alive.

All this excitement could scuttle the wedding – and could get them all killed – unless Mike and Jason figure a way to take the heat off of Jackie and convince the killers they’ve made a terrible mistake. But they are not taking no for an answer, and Mike has to risk everything on a gamble that could save the day – or end in tragedy.

What could go wrong during an impromptu vacation to Las Vegas, where Jason Dickson and Rachel Robinson are planning to elope? Well, when Jason and his partner Mike Stoneman are involved, the answer is, pretty much everything.

Mike, Jason, Rachel, and Michelle all find themselves in a web of conspiracies and blackmail, and Rachel’s brother Jackie is inadvertently caught in the middle of it. Planning a wedding on short notice is tough enough, but having to do it while trying to keep Jackie out of the crosshairs of both the mob and dirty cops makes it next to impossible.

It’s up to Mike, the quintessential veteran cop who always plays by the book, to step outside of his comfort zone and protect the ones he cares for the most. Las Vegas is known as the gambling capital of the world, but the gamble that Mike takes here is one that even professional gamblers would see as a losing hand.

Outside of his jurisdiction and essentially powerless as far as the law is concerned, Perilous Gambit sends Mike on his most dangerous journey yet. But if he plays his cards right, he could find himself winning the most coveted prize of all.

Full of twists and turns that I’ve come to expect from the Mike Stoneman series, Perilous Gambit is another home run from author Kevin G Chapman. It takes all the characters I’ve come to know and love over the (currently) five-book series, and puts them in an unfamiliar situation where they have to rely on themselves and trust in each other in order to live another day.

Thoughts on the Mike Stoneman Series

This is the fifth book of the Mike Stoneman series, and once again I am impressed by the author’s ability to never repeat the same kind of mysteries twice. It’s easy for a series of books of the same genre to get repetitive, yet each entry in the series keeps me eager to read more.

I truly hope the series isn’t over yet, because I want to keep reading more about Mike, Jason, Michelle, and Rachel for as long as the author keeps spinning out quality stories like this one.

Have you read Perilous Gambit by author Kevin G. Chapman? Are you a fan of the Mike Stoneman series? Let me know your thoughts in the comments!

Did you enjoy my review of Perilous Gambit? Need another Kevin G. Chapman novel to read? Here are my favorites!