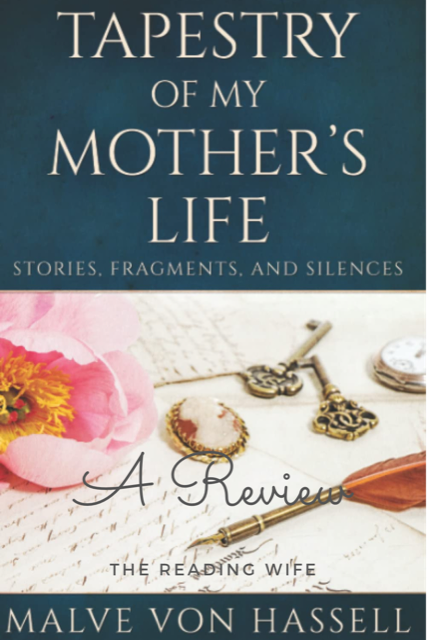 Tapestry of My Mother’s Life

Tapestry of My Mother’s Life is the latest novel to be checked off my to be read list, that never seems to stop growing. I must admit that I always feel accomplished every time I finish a book, even if I’ve replaced it with three more on the list. Anyone else had this happen, or is it just me?

“Christa’s silence, in part typical for her generation, was also intrinsic to her personality. Throughout her life, Christa was unwilling to talk about anything that she could not manage in her own mind. She was the master of suppression and denial- in particular in matters where she fought bitterly against her inability to control a situation.”

Have you read Tapestry of My Mother’s Life? Come on in and let me tell you about it!

About Tapestry of My Mother’s Life

Tapestry Of My Mother’s Life is a biographical account of a woman coming of age in Germany during the 1930s. Malve von Hassell explores her mother’s life through the fragmented lens of transmitted memory, and its impact on the second generation.

Born at her grandfather’s house in Farther Pomerania, 1923, Christa von Hassell had to contend with the increasing and pervasive impact of the Nazi regime. As the child of a German army officer, she moved with her parents often. Through boarding school, university, marriage, the Second World War, life under Soviet occupation, and a new beginning in the West, eventually in America, the biography is an incredible, emotional journey of childhood, survival, and relationships.

The portrayal of Christa’s life also focuses on the role of memory: shaped, distorted, and realigned in the continual process of telling stories of the past in conjunction with silence about many aspects. Children of women who shared similar experiences and life trajectories struggled with the challenge of learning about their parents’ lives during extraordinary times, confounded by a wealth of stories on the one hand and a seemingly impenetrable veil of silence on the other.

Working through such memorabilia, as well as the tales of the past, can offer ways in which one can come to terms with the inherited detritus of thoughts and memories. As such, this account of the life of a unique and complex individual has also wider relevance in that it addresses age-old questions of the relationship between one generation and the next.

Thoughts on Tapestry of My Mother’s life

“The habit of silence on many issues, so deeply ingrained, is a common thread when looking at their life stories. I suspect that many were silent out of a reluctance to burden their children as much as out of an overwhelming sense of discomfort and unease in speaking about their roles as witnesses or even participants at a time when Nazi ideaology permeated every level of existence, tightening its grip on every activity and imposing increasingly stringent controls over movement, writing, and actions.”

I have always had a fascination with the holocaust and the stories surrounding it. It was obviously one of the most horrible times in our history, yet the people who survived it are extraordinary, and I love reading their stories. I am amazed at how many people managed to not only survive, but to thrive in such horrific situations, not allowing themselves to be broken by their situation and circumstances.

This is a time period that isn’t talked about nearly enough, in my opinion. But that is something Malve von Hassell does mention, the silence being a generational trait back then, along with suppressing many painful memories. I do think it was a necessary survival tactic.

Tapestry of My Mother’s Life is a fascinating trip into the past, to learn more about that generation, the era, history, and so much more. It is absolutely worth taking the time to read, and I highly recommend you do so.

Final Thoughts on Tapestry of My Mother’s Life

“The moon has risen

Fill the sky with radiant light.

The trees stand tall and silent

And from the meadow rises

This was the first I’ve read from author Malve von Hassell, but I highly doubt that it will be the last. She has a serious talent for putting a fragmented story together and turning it into something beautiful and eloquently written.

Have you read Tapestry of My Mother’s Life or any other writing from author Malve von Hassell? Are you a fan? Let me know your thoughts in the comments!

Malve von Hassell was born in Italy and spent part of her childhood in Belgium and Germany before moving to the United States. She is a freelance writer, researcher, and translator. She holds a Ph.D. in anthropology from the New School for Social Research and has taught at Queens College, Baruch College, Pace University, and Suffolk County Community College.

She published two children’s picture books, Letters from the Tooth Fairy (Amazon KDP 2012/2020), and Turtle Crossing (Amazon KDP 2021), and her translation and annotation of a German children’s classic by Tamara Ramsay, Rennefarre: Dott’s Wonderful Travels and Adventures (Two Harbors Press, 2012). The Falconer’s Apprentice (namelos, 2015) was her first historical fiction novel for young adults. She also published Alina: A Song for the Telling (BHC Press, 2020), set in Jerusalem in the time of the crusades, and The Amber Crane (Odyssey Books, 2021), set in Germany in 1645 and 1945.

Her latest release was a biography, Tapestry of My Mother’s Life: Stories, Fragments, and Silences (Next Chapter, 2021). She is working on a historical fiction trilogy featuring Adela of Normandy.

Purchasing Tapestry of My Mother’s Life

If you are interested in buying the paperback version of Tapestry of My Mother’s Life, click here.

As I said earlier, I am a big fan of reading stories like this, and if you are too, you’ll want to check out some of my favorites that are similar.

The Tattooist of Auschwitz