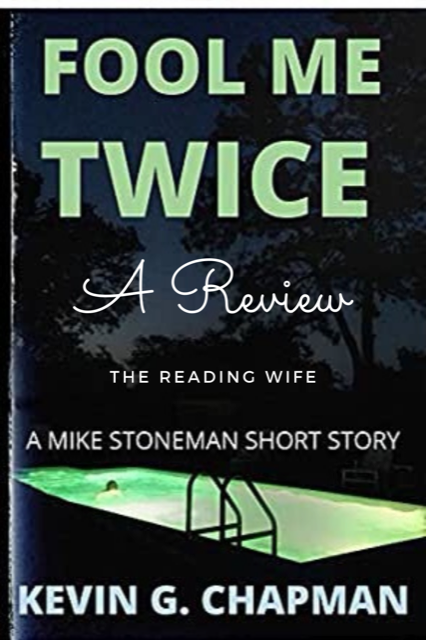 Fool Me Twice from author Kevin G. Chapman is my latest short story to be crossed off the to be read list. This is the very beginning of the Mike Stoneman series that I have reviewed before.

Have you read Fool Me Twice? Come on in and let me tell you about it!

About Fool Me Twice

A wealthy but demanding father is dead in his own swimming pool. NYPD homicide detective Mike Stoneman is called in to investigate and gets the story from the man’s spoiled teenage socialite daughter. She says the accident happened after he hit her. The guy had a history, and there were a variety of drugs in his system, along with alcohol. Poor little rich girl, right?

Years later, when the same woman’s abusive boyfriend bloodies up the same pool, Mike is called in again. Is the sexy internet darling extremely unlucky — or a killer?  This short story is the first appearance of detective Mike Stoneman. Fool Me Twice won first prize in a 2012 short story writing contest, and was later adapted into the award-winning Mike Stoneman Thriller series. Come meet Mike, then continue reading the series.

Thoughts on Fool Me Twice

After reading the five main books in the Stoneman series, I decided it was time to go back and read Kevin G Chapman’s first attempt at building his homicide detective franchise. Fool Me Twice is a short story that can be read in less than twenty minutes.

As the title would suggest, Fool Me Twice features the same young woman implicated in multiple deaths under similar circumstances, and Stoneman is called to investigate each one.

Being Chapman’s first book, the writing is understandably less polished than his more lengthy stories. There’s no real mystery to be solved, or significant obstacles to overcome. The dialog isn’t nearly as witty or profound as some of his later books.

The plot is relatively straightforward, and doesn’t feature any new insights into the character of Stoneman, nor his methods of investigation. But as a first entry into the series, it is intriguing enough for new readers to gain an understanding of how Stoneman operates.

Final Thoughts on Fool Me Twice

Given that this is a short story, I can’t complain too loudly that the story ends rather abruptly, with no real resolution to the plot.

Fool Me Twice is an appealing appetizer to digest before tackling the main course of the Stoneman series. As short stories go, Fool Me Twice does an adequate job at introducing the characters, the situation they’re in, and the brief struggles they have to overcome.

Have you read Fool Me Twice or any other writing from Kevin G. Chapman? Are you a fan? Let me know your thoughts in the comments!

Did you enjoy my review of Fool Me Twice? Need another Kevin G. Chapman novel to read? Here are my favorites!