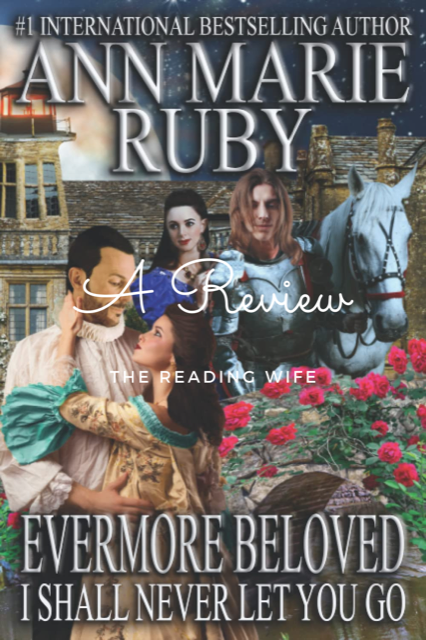 Evermore Beloved: I Shall Never Let You Go is my latest read from author Ann Marie Ruby. This is the second book in a five part series, and I was very excited to start reading Evermore Beloved.

“My loving eyes seek you everywhere,

My inner sense feels you amongst all things,

My inner soul recites for you throughout time,

If only you were mine,

Evermore beloved, I shall never let you go.”

Travel time to a timeless era gone by, where a passionate lover, Jacobus van Vrederic, returns as he fights time and destiny to save his evermore beloved. Along came a gallant knight, a daring seer, and the spirits of Kasteel Vrederic, who journey with him during the sixteenth century through the Netherlands, where they fight another war in between.

The group must not become the hunted as they take an oath to rescue the hunted witches from the stakes and gallows. Passion, love, and hidden secrets change everyone’s lives forever as Jacobus and his group travel through a war-ravaged country fighting for her freedom.

Will Jacobus be able to fight destiny and time to find the vanished love of his life? Will he be able to save the accused witches from the gallows, or will time be a barrier?

I have written extensively on grief and loss, and one of the frequent comments is how my readers can feel the emotions in my writing. I get that same feeling when I read Ann Marie’s books. It is evident that she pours her heart and soul into these books, and especially into the Kasteel Vrederic series.

One of my favorite aspects of these stories is the depth of our main character, Jacobus Van Vrederic. He has feelings and emotions, and they are evident. We saw his priorities grow and change in Eternally Beloved, and it continues here in Evermore Beloved. It isn’t often there is such a great male main character, and I appreciate that.

I’m not going to spoil the book or the series here, but I do highly recommend that you pick it up and read it! Evermore Beloved in a wonderful historical romance novel.

I’m not normally a romance novel fan. To me, they are typically bland, boring, and all the same. Like there is some invisible formula that all romance authors follow, and just change names and places. Once you’ve read one, you’ve read them all.

Ann Marie Ruby’s writing style is significantly different and quite unique, and that is part of the appeal for me, as I can connect with her writing. She took a romance novel and went way outside of the standard box with it, and it makes Evermore Beloved (and the entire series) a worthwhile read!

I highly recommend giving Evermore Beloved and the entire Kasteel Vrederic series a read. I am looking forward to reading book three, Be My Destiny.

Have you read Evermore Beloved from author Ann Marie Ruby? Are you a fan of her writing? Let me know your thoughts in the comments!

Did you enjoy my review of Evermore Beloved? Need another Ann Marie Ruby novel to read? Here are my favorites!

The Netherlands: Land of My Dreams